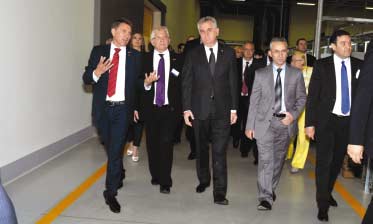 Together with 500 customers, business partners and employees, the Serbian President Tomislav Nikolic took part in the celebrations at the inauguration of the newly-built factory in Indjija north-west of Belgrade.

Along with the factories in Russia and Hungary, the factory will be delivering pumps to the Central and Eastern European market, where there is a growing demand for Grundfos pumps.

Since the spring of 2011, Grundfos has been producing circulator pumps in rented buildings. In addition to several types of circulator pumps, the new factory will also produce the Sololift2 lifting station, which makes it easier for house-owners to handle wastewater from the bathroom or kitchen.

"Our expectations have been far exceeded since we took over the building shortly before Christmas last year. We have set up four production lines in four months, which has only been possible because of our highly dedicated and skilled employees - both in Serbia and Denmark", says Jim Toft Nielsen, General Manager of Grundfos Serbia.

He continues: I am very happy that we now have an ultra-modern factory that is perfectly suited for our production. The 26,000-square-metre factory has been built in just ten months, and the entire construction process has been very positive.

It feels great to be in place in Serbia with our own factory. This offers interesting opportunities for our global production set-up - both now and in the future, says Group President and CEO Carsten Bjerg, who spoke at the inauguration.

"The Serbian adventure has been underway for a couple of years, but the model that involves starting up in a rented building and with a simple production has", according to Jim Toft Nielsen, created a firm foundation for the future development of the company.

"Employee competences have increased in line with the expansion of the company, and this has enabled us to create a strong organization with highly qualified employees, who have handled the relocation in the best possible way", says Jim Toft Nielsen.

In addition to the 136 Serbian employees, a group of Danish employees have been involved in the relocation of production equipment to the new factory in Serbia.

According to Group President and CEO Carsten Bjerg it is remarkable to see how - across cultures - employees manage to perform successful relocations where everything clicks into place. "All employees who have been involved in this project deserve great praise for their work. Especially the Danish employees who have taken part in the entire project.

It is far from easy to shut down a production line and then establish it in another country, he says. The Danish employees, who lost their job has been moved to other jobs in the Danish factories.