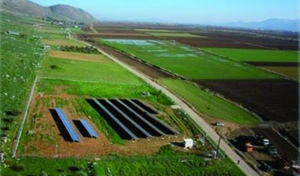 EBRD is financing a major renewable energy programme in Greece

NANOTEXNOLOGY in Greece will explore nanotechnologies, organic electronics and nanomedicine

Sika is opening a production plant for mortars in Greece

Greece, which pays Europe’s highest premium for solar power, said it will fast-track three solar photovoltaic projects with a total investment of 1 billion euros ($1.37 billion) to help revive its shrinking economy. They include the 200-megawatt Kozani plant, to be developed by Public Power Corp. SA, the country’s biggest electricity producer, said Aristomenis Syngros, the head of Invest in Greece, the agency that implements a law aimed at speeding up projects deemed important to the Greek economy. Solar Cells Hellas Group is planning a 131-megawatt plant and Silcio SA has one that would generate 127 megawatts under the program.

The law is aimed at bolstering growth in an economy that may shrink more than 5 percent in 2011 as the government trims spending to avoid default on its bonds. Greece’s relatively strong solar radiation and high price paid by utilities and consumers for power from the sun might turn the nation into Germany’s rival as Europe’s biggest solar market.

"PV is probably the only sector which shows strong development trends in Greece," the Hellenic Association of Photovoltaic Companies, an industry lobby, wrote on its website. Developers applied for licenses to generate 9.5 gigawatts of power in Greece, according to figures published in March. Germany by comparison added 7.4 gigawatts of solar capacity last year, making it the world’s biggest market for the cells. So far, Greece’s bureaucratic hurdles have prevented a solar boom as seen in Italy and Spain, said Pietro Radoia, a solar analyst at Bloomberg New Energy Finance in London. That may have been the country’s luck, he said.
"Greece is in no economic shape to pay for a solar boom and the EU has already called for a reduction in the feed-in- tariffs," Radoia said.Greece has resisted those calls as it hopes the solar sector can draw investments and fuel economic growth. Earlier this month, Greek Energy Minister George Papaconstantinou said Europe needs an "urgent" agreement that would allow sunnier countries in the south to export solar power to those in the north. There’s a "clear need, especially in Germany," for imports of renewable energy from southern Europe given the country’s vow to abandon atomic power, and political turmoil in the Middle East, Papaconstantinou said in Hamburg.

The fast-track law adopted last year removes bureaucratic hurdles to speed up domestic projects that "generate quantitative and qualitative results of major significance to the national economy" and "facilitate the country’s exit from the economic crisis," according to a translation of the law posted on the Invest in Greece website.

Public Power said it aims to win a strategic investor from 15 contenders, including China’s Yingli Green Energy Holding Co., Siemens AG from Germany and a team of Toshiba Corp. and Mitsubishi Corp., for its 500 million-euro Kozani project by early next year. Kozani requires the set-up of a nearby module- production facility. The company hopes to complete the licensing process by the end of January before a scheduled reduction to the feed-in- tariff and start construction in the summer or fall of 2012, Ioannis Tsipouridis, chief executive officer of Public Power’s renewables unit, said in an interview today. Being included in the fast-track program "is a great comfort for us and the investors," Tsipouridis said by phone.

Greece may add as much as 600 megawatts of solar capacity this year, four times the level in 2010, according to estimates from Bloomberg New Energy Finance. More than 200 megawatts were installed through August, Stelios Psomas, a policy adviser at the solar lobby, said by e-mail.

Greece pays 35 to 40 euro cents per kilowatt-hour for photovoltaic electricity. Germany’s premium varies from 21 to 29 cents. Should new installations rise as much or greater than projected, "there is a possibility of really drastic or even retroactive cuts in the coming years" to rates, Radoia said.