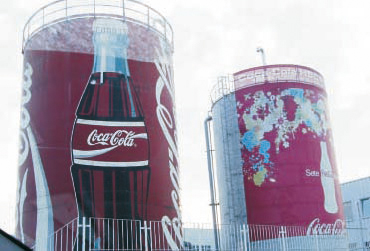 Coca-Cola Hellenic and ContourGlobal have inaugurated an advanced energy saving power plant in Romania as part of an initiative to slash annual CO2 emissions across all of Coca-Cola Hellenic’s operations by more than 20%. The Romania natural gas-fueled cogeneration plant represents the first of a planned group of 15 combined heat and power (CHP) plants that will be installed at Coca-Cola Hellenic’s facilities in 12 European countries. "The opening of the CHP plant represents a milestone to ensure the sustainable development of our operations, and of the communities we serve," said Mr. Doros Constantinou, Chief Executive Officer of Coca Cola Hellenic. "Across all of our 28 territories we have been working to increase efficiencies and reduce CO2 emissions, the main culprit in climate change," he said.
Cogeneration is inherently more energy efficient than using separate power and heat generating sources, making it an effective anti-pollution strategy. As a result, the EU in recent years has begun urging member states to modernize their industrial and municipal cogeneration systems to improve energy efficiency and curtail regional emissions.

GE Energy is supplying ContourGlobal with 19 Jenbacher gas engines
"For such a large energy initiative, we needed to find a reliable power generation equipment supplier that could support our project on behalf of Coca Cola Hellenic under a very tight delivery schedule," said ContourGlobal President and Chief Executive Officer Joseph C. Brandt.
Each of the bottling plants utilizing GE Energy’s Jenbacher CHP engines will be able to eliminate up to 40 percent of their annual carbon dioxide (CO2) emissions, which demonstrates the ongoing commitment to reduce the carbon footprint of the bottling operations in support of EU goals while also reducing the operational costs by generating their own onsite power.
Under the first phase of the Coca-Cola Hellenic CHP initiative, GE Energy is supplying ContourGlobal, the project developer, with 19 Jenbacher gas engines-representing a total output of 58 megawatts (MWel). The first two of GE’s Jenbacher cogeneration modules were installed at Coca-Cola Hellenic’s Romania bottling facility while the other units will be installed at Coca-Cola facilities in six other European countries: Ukraine, Russia, Poland, Greece, United Kingdom (Northern Ireland) and Italy.

The new CHP plants will supply a highly efficient, reliable onsite supply of electricity, as well as hot and chilled water, to Coca-Cola Hellenic’s bottling facilities.
"With the European Union emphasizing the role of energy efficiency in its efforts to reduce regional greenhouse gas emissions, we are very excited to showcase how our Jenbacher technology can help energy developers and industrial operators like ContourGlobal and Coca-Cola Hellenic meet with their energy and environmental goals," said Prady Iyyanki, CEO of GE Energy’s Jenbacher gas engine business.
Subsequent project phases call for additional CHP plants to be installed at bottling facilities in Austria, Czech Republic, Slovakia and Serbia as well as in the African nation of Nigeria.
The new Romania cogeneration plant is powered by two of GE’s three-MW J620 Jenbacher gas engines, providing the factory with a reliable source of onsite power while helping support the EU’s emissions reduction goals.
The initiative supports the European Commission’s goal to adopt more stringent environmental targets for member states to help Europe achieve a 20 percent reduction in emissions by 2020.
GE Energy’s Jenbacher gas engines will be delivered throughout 2009 and 2010, with commissioning scheduled as the plants are ready. The equipment is being built at GE’s gas engine manufacturing center in Jenbach, Austria.
Coca-Cola Hellenic and ContourGlobal will open up to three plants more this year with others following in 2010 and beyond. Another newly introduced feature of the facility in Ploiesti is an intelligent, fully automated, mega High-Bay warehouse which is the first of its kind in Romania. The system takes palletised products from the six production lines via a conveyor and allows for storage and retrieval of stock using eleven automated cranes. The on-site storage facility heightens efficiency and also provides Coca-Cola Hellenic with the flexibility to expand capacity as its business further develops.

About GE Energy
GE Energy is one of the world’s leading suppliers of power generation and energy delivery technologies, with 2008 revenue of $29.3 billion. Based in Atlanta, Georgia, GE Energy works in all areas of the energy industry including coal, oil, natural gas and nuclear energy; renewable resources such as water, wind, solar and biogas; and other alternative fuels. Numerous GE Energy products are certified under ecomagination, GE’s corporate-wide initiative to aggressively bring to market new technologies that will help customers meet pressing environmental challenges.
GE is a diversified global infrastructure, finance and media company that is built to meet essential world needs. From energy, water, transportation and health to access to money and information, GE serves customers in more than 100 countries and employs more than 300,000 people worldwide.

About ContourGlobal
ContourGlobal develops and operates electric and combined heat and power businesses around the world for governments and multinational companies. The company focuses on high-growth, under-served markets and innovative niches within developed markets such as renewable energy and Combined Heat and Power (CHP). The Company consists of eleven businesses in operation and construction on four continents with approximately 1,000 MW of generating capacity and an active pipeline of new development business totaling 10,000 MW.