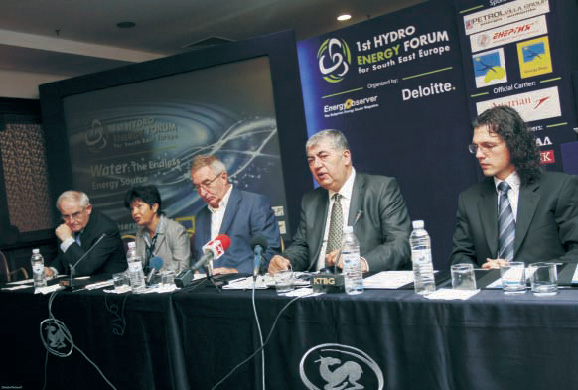 The Forum heralds new hydro projects in Bulgaria and the region

The year 2009 has brought times of hardship in every part of the world, including the South-East European countries. The world economic crisis has severely affected many industries, among which the energy sector. The financing of crucial energy projects in the region is suffering delays. A number of countries are still experiencing energy deficit, which is slackening the pace of their economic development. However, a crisis can also prompt new possibilities.
Hydro power can be one of them. Regardless of the fact that the relative share of hydro electricity in most of the countries in the region is far from great, hydro power is an important component of the energy mix. On a global scale, hydro power produces almost 20% of the world’s electricity. Unlike wind and solar power, the electricity produced by water allows for a greater stability of the electricity systems and comes at a competitive price. Moreover, hydro power stations can be a reliable long-term power source with more than 100 years of operational lifetime. If the zero emissions of GHG are added to that, hydro power stands out as an important contributor to the 20-20-20 target of the EU energy policy.
At the same time the hydro power sector is facing plenty of challenges. Despite their large availability, less than one third of the world’s hydro resources have actually been developed. In the region of South-East Europe, each country is experiencing problems of different nature because of the particular development of the sector, the specific national energy policies, the various aspects of the hydro facilities ownership, the regulatory policy and the setting of hydro energy prices, the lack of investment incentives.
Almost everywhere there is an apparent need for more efficient use of the hydro power potential and water management, new technological and software solutions, rehabilitation of the existing facilities, opening up investment possibilities for the construction of new ones, stepping up the development of the electricity transmission grids and the regional energy market, establishing new approaches and policies in the hydro power sector.

The First Hydro Energy Forum for South-East Europe,
which take place in Golden Sands, Bulgaria, from 15th - 16th October 2009, become a focal point of ideas and visions in this direction. The main purpose of the forum was to bring together industry representatives and public authorities to talk over the key issues concerning the development of the hydro power sector in the region. About 60 delegates from Albania, Austria, Bulgaria, Belgium, Czech Republic, Germany, Italy, and Romania discussed topics such as Renewable Energy Policies and Regulation, Hydro Power’s Role in the Management of the Electricity System, Refurbishment of HPPs, Financial Structuring of HPP Projects, as well as Reducing GHG Emissions through Hydro Projects.

Main forum topics:
• Hydro power potential of the South-East European countries: Alternatives to reduce the energy deficit in the region;
• Selection of strategies and policies for utilising hydro energy in the region: Possibilities for implementing bilateral and multilateral hydro energy projects. The role of small hydro in the energy mix;
• European partnership perspectives: Modern technologies, professional experience and cooperation with front-runners to develop hydro energy potential;
• Regional experience in national and regulatory policies: Possibilities and incentives for hydro power production and differentiation of hydro power stations according to technology applied;
• Role and significance of the national electricity companies, electricity system operators and electricity distribution companies for the development of the hydro sector in the SEE countries;
• Protection of the environment, legislation and permit awarding procedures for hydro power plants, policies and practices of the countries in the region;
• European funds, financial structuring of the hydro projects and innovative investment approaches as an alternative to the financial crisis;
• Possibilities for public-private partnership in the construction of small hydro power plants and the role of municipalities.

Highlights in the presentations
Some of the highlights in the presentations made during the two days of the Forum focused on the relations between national authorities and investors. Two of the most common obstacles cited by the industry included the licensing regime and the cumbersome process of grid connection. The Bulgarian Ministry of Economy, Energy and Tourism confirmed that legislative amendments in this respect were under way, while the representative of RWE elaborated on the finding of a mutually beneficial crosspoint between the interests of the investors and countries.
The region is of marked interest to the large utilities because of the growth of energy demand. Especially in the hydro power sector, countries like Serbia, Macedonia and Albania offer possibilities for harnessing a significant hydro potential. Albania in particular indicated growing commitment to the use of renewable energy sources, its energy priorities laid not only in the hydro field but also in the utilization of biomass, wind and solar energy. Bulgaria, which ranks among the net exporting countries in the region together with Bosnia and Herzegovina, Romania and Serbia, is also likely to become a regional renewable energy seller once it has adopted the most recent changes in the European Union’s Renewable Energy Directive.

Construction of hydro capacities in times of crisis
In view of the current financial crisis, the financing of projects, especially large hydro, also came to the fore. The most common risks accompanying the construction of large hydro capacities refer to the variations in the costs, due to geological, archaeological or purely planning issues, as well as in the projected revenues. At present higher requirements are set for guarantees of such projects but with a whiff of optimism the expert of Deloitte Bulgaria concluded that the construction of large hydro facilities was a long-term project, while crises up to now had proved to be short-term phenomena.
Indeed, some official statements made during the Forum served as a reassurance that the crisis had not extinguished the investment ambitions. An Italian company constructing small hydro power plants in Bulgaria announced its intentions to invest in a second project in the country. Representatives from the Bulgarian National Electricity company and its Romanian counterpart stated that they were to start work on a joint project for two hydro cascades on the Danube River. Kostadinka Todorova, head of the department responsible for RES Policy in the Bulgarian Ministry of Economy, Energy and Tourism, pointed out that if Bulgaria could not manage alone to reach its goal of 16% renewable energy share by 2020, it could do so by entering joint projects with its neighbours on the bordering rivers, namely with Romania and Greece, or Macedonia and Turkey. Financing of these projects was to be sought largely through the European funds.
Next month some of the attendees of the Forum will take part in a round table to draft a paper with recommendations for the development of the hydro sector in the SEE region.