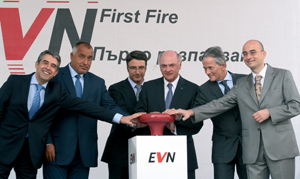 The new cogeneration plant of EVN Bulgaria Toplofikatsia, built in partnership with Siemens is located on the site of TPP North in Plovdiv and this is the most modern cogeneration facility not only in Bulgaria but also on the Balkans for now. The total investment of EVN Bulgaria Toplofikatsia is 100 million BGN, which in the conditions of a severe financial recession in the last two years is a fresh "financial injection" for the local economy. Evidence for this is the number of involved workers and subcontracting companies in the project - over 300 people, 20 companies and more than 50 suppliers from Bulgaria and abroad. The groundbreaking of the facility was made in September 2010 and a year later the new plant is ready to face the upcoming heating season.

The capacity of the new energy "jewel" for Plovdiv is 49,9 MW (megawatt) electric power and 54 MW thermal capacity. By commissioning the new cogeneration, EVN Bulgaria Toplofikatsia will increase its coefficient of efficiency by 20% from the current 70% to over 90%, as the new gas turbine is of a new generation and is extremely effective. Estimated annual electricity production of the new cogeneration plant exceeds 290 thousand MWh (megawatt hours), which is almost 3 times more than the currently produced by the existing equipment of the currently existing TPP North. It is expected 81% (about 261 thousand MWh) of the planned total production of hot water for the new heating season 2011/2012 to be provided by the new cogeneration plant.

Extremely important for all citizens of Plovdiv and the region is that thanks to the investment in the modern cogeneration, EVN Bulgaria Toplofikatsia significantly reduces harmful emissions emitted in the production of each megawatt hour electricity and heating energy. With the completion of this major projects at the site of TPP North, EVN Bulgaria Toplofikatsia will be able to offer its customers in Plovdiv more stable prices of heating energy based cost-effective energy production which in the conditions of rising prices of basic fuel - natural gas, will allow a clearer and long-term forecast and attraction of new customers to the central heating service.
Cogeneration is a technology for centralized simultaneous production of both electricity and heating. In traditional methods of electricity production a great deal of useful heating is discharged into the environment in the form of condensing heat from the steam. In contrast, the "cogeneration" technology uses this "waste" heating and simultaneously produces both heating and electricity in a combined process with greater efficiency.

Bulgarian Prime Minister Mr. Boyko Borisov and the Prime Minister of the Federal Province of Lower Austria, Dr. Erwin Proell, the Chairman of the Management Board of EVN AG Dr. Peter Layr and the Chairman of the MB of EVN Bulgaria Mr. Jorg Sollfelner kindled for the first time the new cogeneration facility of "EVN Bulgaria Toplofikatsia" in Plovdiv. The ceremony was also attended by Stefan Szyszkowitz, a member of the Management Board of EVN AG, Austria’s Ambassador for Bulgaria his Excelency Gerhard Reiweger, the governor of Plovdiv Ivan Totev, Minister of Economy, Energy and Tourism Mr. Traycho Traykov, Minister of Regional Development Mr. Rosen Plevneliev, the mayor of Plovdiv Slavcho Atanasov, local government representatives, parliamentarians from the region, representatives of project partners. During the ceremony, Bulgarian Prime Minister Boyko Borisov and his Austrian colleague, Dr. Erwin Proell symbolically named both turbines of the cogeneration plant. Mr. Borisov named the gas turbine after the name "Maritza" and Dr. Proell named the steam turbine after "Sissi" as they approached the Austrian Empress Elizabeth.