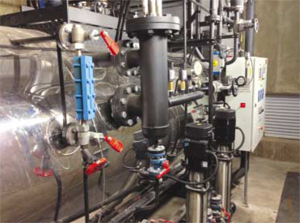 Eqtec Iberia, part of the Spanish holding company Ebioss Energy, is building a biomass CHP plant near the village of Stroevo, Bulgaria. The facility, which is located in proximity to Plovdiv, is powered by GE’s Jenbacher gas engine technology and will produce heat and power from straw and wood chips, the Spanish company announced on its website. The project named Karlovo was started in October 2013 and is planned to be finished by the end of September this year.

The Karlovo plant is the latest project in Ebioss’ strategy to apply its Integrated Biomass Gasification Cogeneration Power Plant (IBGPP) technology throughout Europe. The initiative is aimed to help countries increase their usage of renewable energy sources. Apart from Spain and Bulgaria, Ebioss Energy develops projects in other European countries such as Italy and Germany.

According to GE, the facility powered by syngas from straw and wood chips will produce enough electricity to power 2,000 homes. The company will supply a total of three fuel-flexible, robust and high-efficiency Jenbacher engines - one J612 and two J620 units, for the the 5 MW Karlovo plant.

"The IBGPP plant we developed achieves a far higher electrical efficiency than the thermal technologies traditionally used in a plant of this size. This will enable us to deploy the IBGPP technology economically with GE elsewhere in Bulgaria and in other nations to help them enjoy greater energy independence and fuel diversity," Luis Sanchez, CEO of Ebioss further explained.