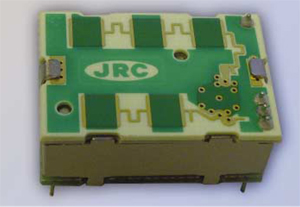 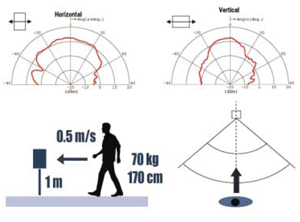 PIR sensors
The passive infrared sensor (PIR) detects changes in the heat flux caused by the motion of human body, that is in contact with the environment by changing its temperature. The radiation lies in the infra region with its peak wavelength of 9.4mm, that is detected by the pyroelectric material of the PIR sensor, that generates energy in response.

As the construction regards, PIR detectors incorporate a Fresnel lens in order to focus the radiation to the sensor elements, and also having dual or quad-elements to subscract the ambient temperature and reduce the number of false alarms. PIR sensors can detect correctly horizontal movements, while radial movements cannot always be detected. There are also intelligent digital PIR sensors available like Nicera’ s pyroelectric passive infrared sensor (PIR-sensor).

This device is a digital output pyrosensor, but no communication with a microcontroller is necessary. In case of detection of a moving object (human being), the output voltage of the output pin is high (Vdd-1V min) for a preset ONtime, otherwise low (< 1V). The setting of ON-time and the sensitivity is done by applying appropriate voltage values at the SENS- and ON-time-pins.

With this product, a movement detector can be designed with only a few external devices. Disadvantage of the PIR technology is the need of the Fresnel lens, the ability to detect only remarkable human motion in tangential direction.

Radar sensors
Radar sensors can detect the slight movements of the human body, and such sensors integrated in an intelligent system, could overcome the problems encountered by PIR sensors. However, to fulfill all the requirements, these sensors need to be very small, low cost, low power and low energy consumption.

In the past radar systems could only be set up by the use of expensive, big and heavy components like wave guides.

Today, using planar technology, the sensor modules are small, cost effective and robust.
The radar modules are emitting electromagnetic radiation in the radio frequency range of 1 8...27GHz, the so called K-Band. A portion of this range from 24...24.250GHz is the ISM (Industrial, Science and Medical) radio band. The K-band is allowed to use nearly worldwide with no limitations.

The radar radiation is reflected by solid objects and the reflected radiation is used for detecting objects. The amount of reflected radiation, which is detected by the radar module, is not only depending on the distance of the object, but also on its size and material. A metal surface is a very good radar target due to its high radar cross-section, and even a human being is reflecting quite well because of high ar -value of water contained by the body.

A person can be detected at a distance of 12 meters even with smallest standard modules. Many of the plastic materials are more or less transparent for microwave radiation. Therefore the sensor module can easily be hidden behind a plastic panel which is a huge advantage for the outdoor design of the final product compared to pyroelectric detectors, which need a Fresnel lens for proper operation.

The operation of these sensors is based on the Doppler effect to calculate velocity data about objects at a certain distance. The reflected signal radiated towards a desired target has an altered frequency. This variation gives direct and highly accurate measurements of the radial component of the target’s velocity relative to the radar.

The difference between the observed frequency and the emitted frequency of a wave for an observer moving relative to the source of the waves is called the Doppler effect. It is commonly experienced when a vehicle equipped with a siren approaches, passes and recedes from an observer standing still.

The received frequency is higher (compared to the emitted frequency) during the approach, it is identical at the instant of passing by, and it is lower during the recession. This changing of the frequency also depends on the direction the wave source is moving with respect to the observing point.

The Doppler radar is used to detect moving objects and evaluate their velocity. A reflective moving object in sight of the sensor generates a low frequency sine wave at the sensor output, which is proportional to the object speed.
The frequency transformation could be described with the following formula:

where v is the velocity of the object, c is the speed of light. The Doppler (beat) frequency is as follows:

which is proportional with the speed of the moving object. The amplitude depends on the distance and the reflectivity of the moving object.
Exact measuring of velocity is a nice feature, many microwave radar sensors from RfBeam are capable to do this for higher speed regions even. However to detect presence of human beings with microwave technology is a task, where it is enough to measure speed up to 1 m/s (3,6 km/h), but a tiny, cheap and simple to use detector needs to be used.

WaveEye Kband Doppler sensor from New Japan Radio Corporation
While conventional microwave sensors or modules need to have complete circuit built around to get them to drive for instance an intelligent lighting system, there are some easy to use, integrated motion detector modules, based on 24 GHz microwave Doppler-effect technology. One of them is the NJR4265 from New Japan Radio Corporation, where antenna, RF circuit, IF amp, MCU and voltage regulator are integrated in a small package of the size 1 4 x 20.4 x 8.8 mm.

NJR4265 J1 is intelligent motion sensor that is designed for the sensing of short distance low speed movement object of e.g. pedestrian. The steady sensing of moving object is realized by embedded software. lt is suitable for the built-in use of the sensing function to various equipments as all functions are integrated in a small package and it can be easily controlled from PC/MCU by UART interface, but stand-alone operation is also possible.

The signal processing software is responsible for the steady sensing, enhancing signal from movement object and decreasing random noises, and decreasing mutual interference between sensors.

Furthermore it is also capable of identifying the direction of movement (approaching or leaving).
The device is characterized by low operation voltage 3.3-5V and low power consumption, in sensing state the operating current is 60 mA, while in steady state is only 4 mA.

On the block diagram it is visible, that the patch antenna and the RF circuit are built together with the analog filtering and the signal processing circuit. The radiation pattern shows, that this microwave sensor can detect movement both horizontal and vertical directions, which gives a remarkable advantage versus PIR technology. The detecting range is maximum 10 meters in +/-35 ° with the speed of approaching of 0.25-1 m/s, measured as show on the figure.

In order to test the device there is an evaluation kit available, which translates the UART interface to USB, so that the device can be connected to a PC.
The provided software will be able to detect approaching and leaving as shown on the screenshots.
The device can be used in combination with MCU/PC, in this case the threshold (range) settings are done by the processor.

When used in standalone mode, the range settings are done with a potentiometer.
In both cases the indicator LEDs could be also changed to a driving circuit, that can be used for interacting with the system to be controlled by motion, e.g. light switching on when human approaching, and switching off when leaving.

Application examples
As the NJR4265 device is small and based on microwave radar technology, it can be easily built into the controlled system. The very attractive price level and the easy operation and installation makes it possible to use this device instead of PIR based systems, or extending it with.

Application area is wide, most popular usage is the motion switch of automatic doors, the automatic switch of lighting systems or adding energy saving features to television sets, climate controls or PCs. As the Doppler-technology makes it possible to use this device for speed measurement, special usage like detecting swing speed of golf or tennis rockets are also possible. 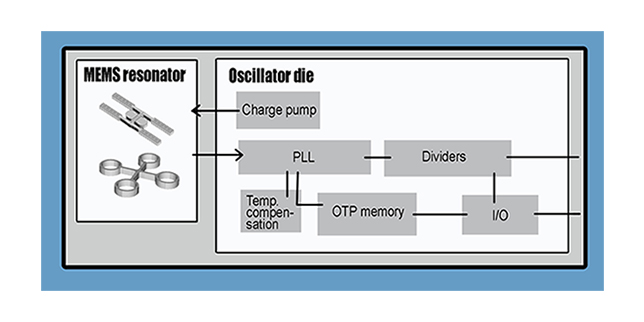 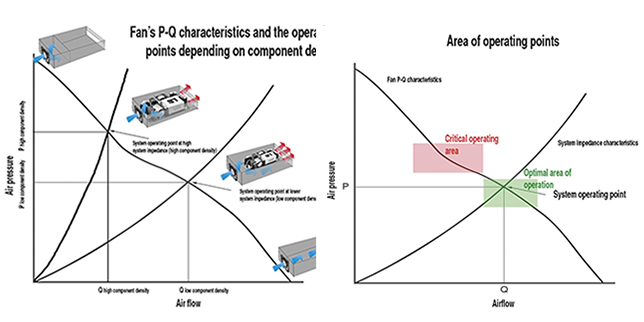 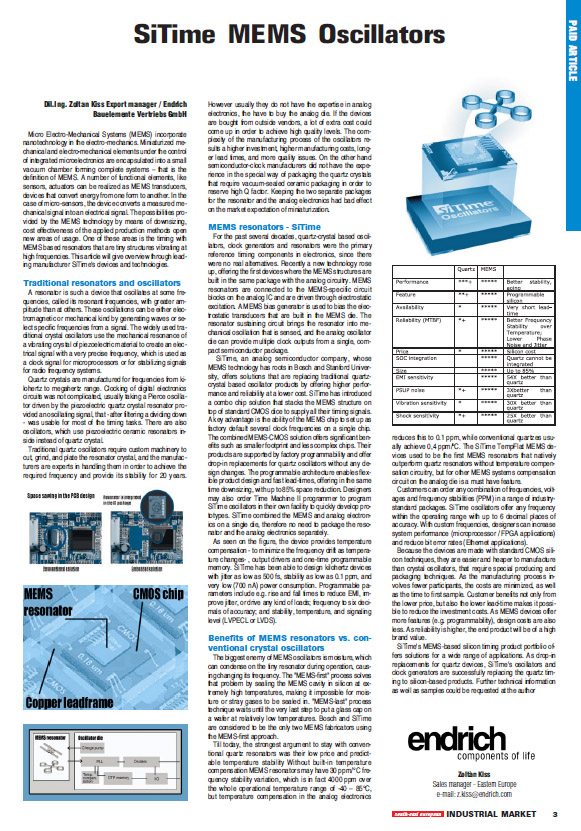 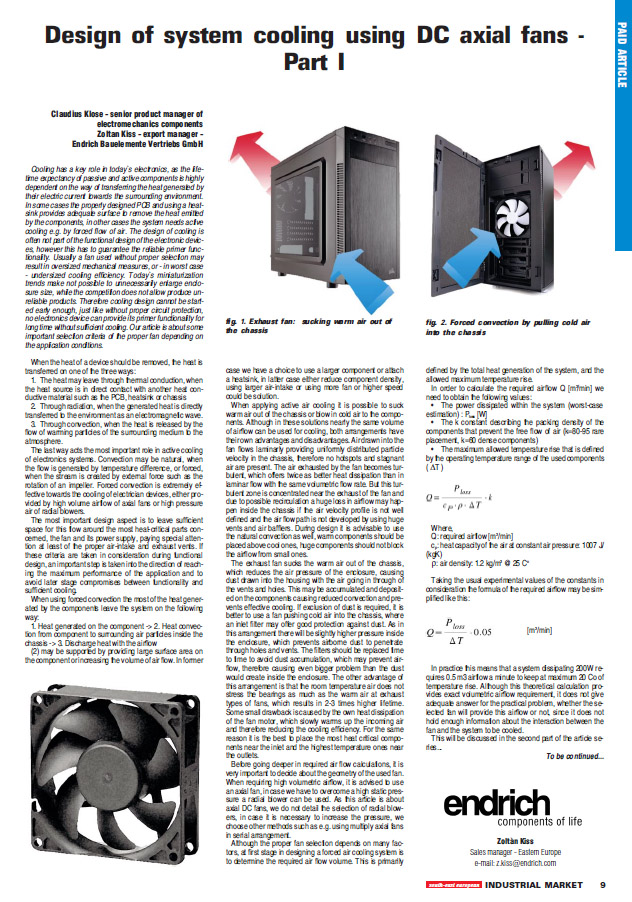