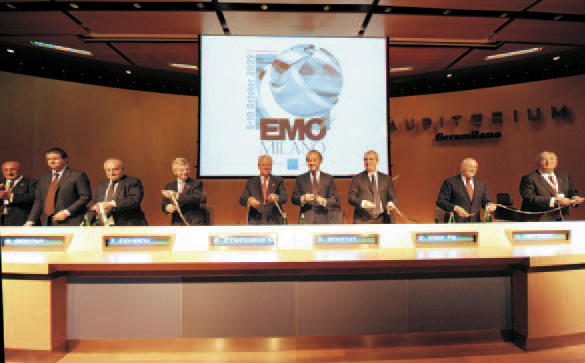 The “machine tool world exhibition” promoted by CECIMO, European Committee for the Co-operation among Machine Tool Industries, was again hosted in Milan from 5 to 10 October at the new “Fiera Milano” fairground. The exhibition was gathered together the main protagonists of the world scene operating in all the segments of the production systems industry - metal forming and metal cutting machine tools, machines for welding, for thermal and surface treatments, robots, automation hardware and software, assembling, tools, parts, components, accessories, metrology, quality control, systems for safety and environmental protection, etc.

Massive attendance by international manufacturers
The event occupied an area of about 180,000 square meters, with 100,000 hosting stands, at the Fiera Milano Exhibition Centre, where more than 1,300 exhibitors and 200,000 visitors from all over the world are expected. The distinctive feature of the Milan editions of EMO is internationality. Foreign companies account for 70% of exhibitors for the event, while the previous edition of the show attracted to Milan an impressive 60,000 international visitors from 100 different countries. Although the international prestige of the exhibition event and such massive attendance by international manufacturers are reasons for pride for the organisers, there is concern over the difficulties that small-medium sized Italian companies are encountering, since they have smaller resources to invest compared to international competitors and therefore risk being unable to grasp the opportunities associated with attendance at EMO MILANO 2009.

Support for small-medium sized Italian companies
In order to facilitate Italian manufacturers, UCIMU-SISTEMI PER PRODURRE – the Italian association of machine tools, robot and automation manufacturers that, through its subsidiaries, organizes the Milan edition of EMO signed an agreement with the CREVAL Group (Credito Valtellinese, Credito Artigiano, Banca dell’Artigianato e dell’Industria, Credito Piemontese). This agreement envisages the opening of a credit line of 5 million Euro intended to finance the costs of participation at the exhibition by Italian companies. CREVAL will also - only for UCIMU member companies - provide special benefits in current account management and advances on invoices. The CREVAL credit line joins those already implemented through agreements signed by UCIMU-SISTEMI PER PRODURRE with Banca Popolare di Milano and Gruppo Intesa San Paolo, for an overall total of 12 million euro supporting Italian attendance at EMO in Milan.
Other support for small-medium sized companies at EMO MILANO 2009 also includes the “EMO ALL INCLUSIVE” package, comprising show area, promotional material, handling, services and numerous other benefits, as well as discounts on pre-furnished stands offered by Fiera Milano.

The world of metalworking
Created in 1975, EMO, testifies the evolution of the world of “metal machining”, encouraging, by a meeting and exchange of views between manufacturers and end users, the definition of more and more advanced technical solutions.
By proposing the qualitatively highest synthesis of the solutions set up by the worldwide machine tool industry, EMO has affirmed its role as world showcase of technological innovation: a meeting occasion, alternatively hosted in Hanover and in Milan, on which the attention of the operators belonging to the whole world manufacturing industry is concentrated.

Wealthy repertoire of products and systems
By its technological repertoire of products, EMO MILANO 2009 is proposing itself as the expression of the universe that plans and produces innovation.
Its exhibition pavilions were a suitable showcase for all “machines (and not only) to make” new products with higher technological contents and higher competitiveness.
On the other hand, the flexibility offered by the structures of the cutting-edge fair complex was well used by EMO MILANO 2009 to enhance the high level of technological integration attained through the evolution of the machine tool industry.
Indeed, nowadays, the most advanced offer of the sector is represented by machines and systems based on a functional modularity, adaptable to production changes, more easily and more rapidly than the classical working units.
Not casually, the peculiar techniques to metal forming, metal cutting and automation are more and more often summed up in one single production process, carried out by “hybrid machines”, the new frontier of the most dynamic among the industrial sectors.

Investing in the future
In the machine tool sector, the trade shows are among the most functional instruments to promote offer and company image. In this connection, EMO is undoubtedly the most qualified occasion to establish profitable partnership relations with end users, whom the protagonists of the world exhibition can propose the solutions set up to meet the most specific requirements connected with the manufacturing production.
These requirements are steadily evolving, influenced by the market globalization and by the consequent internationalization of the company organization, which compel the world industrial apparatus to be equipped with agile production facilities, characterized by more and more extreme flexibility and capacity of reconfiguration.
Therefore, EMO MILANO 2009 offers the manufacturers of metal forming and metal cutting machine tools, robots, automation and relevant auxiliary products, the opportunity to emphasize their capacity to supply systems capable of rationally exploiting productive resources, while reducing the use of energy, raw materials and means.

The success of the 2003 edition
The most recent edition of the Milan exhibition (EMO MILANO 2003) was crowded by over 155,000 visitors, of whom 60,000 flocked to Italy from 104 countries from the rest of the world: Europe (80.5%), Asia (13.5%), Americas (4.5%), Africa (1%) and Oceania (1%).
Globally, 38 countries were represented, attesting the universality of the show, whose booths covered a surface of 127,275 sq m in the former Milan exhibition centre. The value of the 6,500 machines, displayed along an exhibition front of around 30 km, was estimated at 550 million Euro.
The widest booth covered more than 2.000 sq. m; the average exhibition surface was 78 sq. m, consistently with the composition of the sector, in which differently structured enterprises are operating.