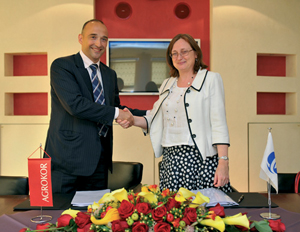 The EBRD is stepping up its efforts to promote the generation and use of green energy in Croatia by financing the first biogas project in the country. The Bank is providing a 5 million Euro loan to Croatia’s Agrokor, a leading agribusiness company in south-eastern Europe, to support the construction of a combined heat and power generation plant that will use biogas as primary fuel.

The proceeds of the EBRD loan will be used to purchase and install the biogas power plant, sterilisation and water purification equipment. The project is expected to be completed by September 2012 and will be in full compliance with EU environmental regulations.
Located in Gradec, 40 km outside the capital Zagreb, the plant will be fuelled by organic waste, by products of Agrokor’s food production process. It will have a generation capacity of 1 MW of electricity, which will be supplied to Croatia’s power grid and will also produce up to 1 MW of heat.

"Investing in energy efficiency and renewable energy, as well as improving the diversity of energy supply is a priority for the EBRD. We are delighted to be part of this ground-breaking project for Croatia. It will demonstrate the commercial viability of biogas projects in the agribusiness sector and set high efficiency standards in this field, serving as an excellent example for both the agribusiness and renewables sector", said Zsuzsanna Hargitai, EBRD Director for Croatia.

"The most recent cooperation with EBRD is the beginning of Agrokor’s major project of building biogas facilities based on organic and food processing waste. The biogas plant construction is also an opportunity for Agrokor as the absolute regional leader in its core businesses to show that investments in biogas facilities have a great potential both in terms of cost reduction and efficient by-product utilisation, while reconfirming the high level of environmental awareness within Agrokor", stated Mislav Galic, Agrokor’s Executive Vice President for business group food.

The EBRD has a long-standing cooperation with Agrokor, having previously supported a variety of the company’s investments in Croatia and neighbouring countries. The biogas facility in Gradec is financed under the Bank’s Agribusiness Sustainable Investment Facility.

Since the beginning of its operations in Croatia, the Bank has committed over E2.5 billion to the country’s economy. The EBRD funds mobilised additional investment of EUR 4 billion in various sectors of Croatian economy.

In the agribusiness sector alone the EBRD has directly committed over E6.8 billion in over 440 projects across central and eastern Europe and the Commonwealth of Independent States since 1991.