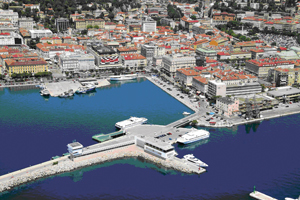 The EBRD is supporting an investment programme in the district heating services of Rijeka, the largest port city in Croatia. The Bank will provide a loan of up to 10 million EURO to the service provider Energo Rijeka for the rehabilitation of the existing district heating network and the implementation of an investment for a new combined heat and power plant.

The Government of Austria has confirmed funding to support the project implementation and further technical assistance will be provided by the EBRD’s Shareholder Special Fund.
Rijeka has a population of 190,000 and is an administrative and industrial centre with vital transport links for the country. Energo Rijeka is the exclusive provider of district heating services in the Rijeka area under a 30 year concession agreement signed in 2006.

To adapt to the rising demand for district heating in line with EU objectives and regulations the company has launched a comprehensive modernisation and investment programme. It includes the rehabilitation of the existing district heating network, the implementation of an integrated energy management system and - in a second phase - a new combined heat and power plant.

Vedrana Jelusic Kasic, EBRD Director for Croatia, said: "This is a very important investment for us because we attach great importance to the development of areas with high potential like the city of Rijeka. The investment will have a positive impact thanks to operating improvements, including reduction of heat and water losses and environmental and economic benefits from which the whole city and its population will benefit."

Sanjin Kirigin, CEO of Energo Rijeka, added: "We are very pleased with the fact that a reputable international institution like the EBRD decided to finance Energo’s district heating operations. We expect that the successful implementation will bring significant economic and environmental benefits to the company and the city of Rijeka. Also, I would like to thank the city for their support in the development and structuring of the project."

As of end-February 2014, the EBRD has signed 156 projects in Croatia for a total amount of 2.9 billion euro. The Bank’s investments are divided between the industry, commerce, agribusiness, energy, financial and infrastructure sectors.