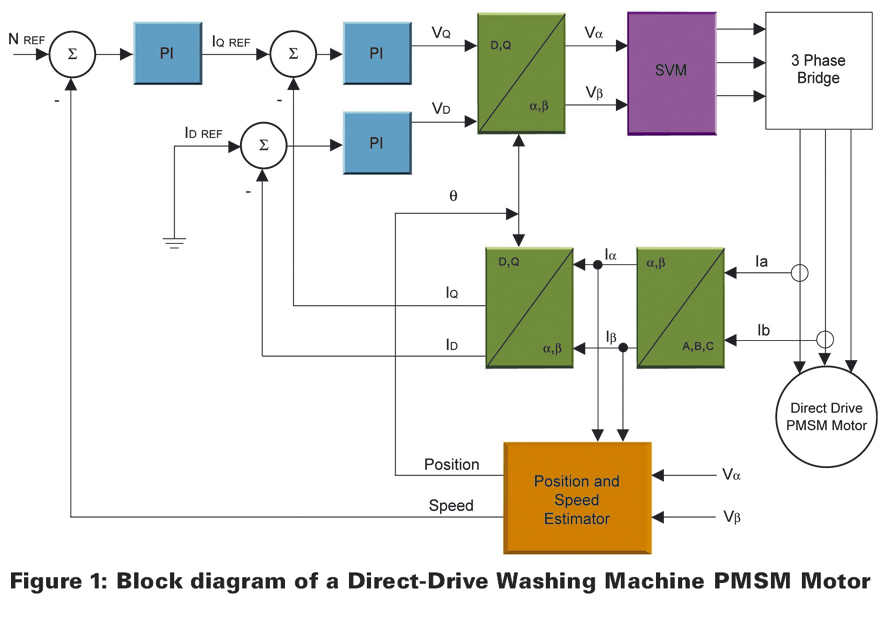 Given that motor-driven equipment, including motors, pumps and fans, can account for 64 percent of the electricity consumption, improvements to motor systems could result in dramatic savings in energy and cost. The Brushless DC (BLDC) motor is used in both consumer and industrial applications, owing to its compact size, controllability and high efficiency. Examples include air-conditioner compressors, direct-drive washing machines, refrigerator compressors and vehicle air-conditioning compressors.

This article describes how sensorless Field-Oriented Control (FOC) of the Permanent Magnet Synchronous Motor (PMSM) type of BLDC motors can be implemented in home appliances such as washing machines.

By using the latest Digital Signal Controllers (DSCs), such as Microchip’s dsPIC33F motor-control family, designers can improve energy efficiency and cost savings in motor systems. Where DSCs are used, the sensorless FOC algorithm is a natural fit for PMSM motor control (see Figure 1).This is because DSCs and their on-chip peripherals enable FOC algorithms to be executed efficiently in order to implement a sensorless method for rotor-position sensing in BLDC motors. The FOC algorithm generates a 3-phase voltage as a vector to control the 3-phase stator current as a vector. By transforming the 3-phase time- and speed-dependent system into a 2-dimensional rotating coordinate system aligned with the rotor (using Park and Clarke transforms), the torque and flux components become time-invariant, allowing control with conventional techniques such as Proportional & Integral (PI) controllers, as with a DC motor.

When a sinusoidal input current is applied to the stator, it causes a rotating magnetic flux to be generated. The speed of the rotor is directly related to the rotating flux vector. The flux vector must be kept in alignment with the rotor magnetic poles at all times, so that the motor can produce the maximum torque.

The entire process of coordinate transformations, PI iteration, transforming back and generating pulse width modulation (PWM) is illustrated in Figure 1, which describes the functions required for FOC control. The process begins by measuring the 3-phase motor currents. Through a series of coordinate transforms, the time-invariant (under steady-state load conditions) values of torque and flux can be indirectly determined and controlled with classic PI control loops. Error signals are formed using Id, Iq and reference values for each. The Id reference controls rotor-magnetising flux.

The Iq reference controls the torque output of the motor. The error signals are input to PI controllers. The outputs of the controllers provide Vd and Vq, which is a voltage vector that is sent to the motor. A new coordinate transformation angle is calculated based on the motor speed, rotor electrical time constant, Id and Iq. The FOC algorithm uses the new angle to place the next voltage vector, in order to produce an amount of slip for the present operating conditions. The Vd and Vq output values from the PI controllers are rotated back to the stationary reference frame using the new angle. This calculation provides quadrature voltage values va and vb. Next, the va and vb values are transformed back to 3-phase values va, vb and vc. The 3-phase voltage values are used to calculate new PWM duty-cycle values that generate the desired voltage vector.

In the FOC algorithm method, 3-phase-separated PWM signals are Sine-wave modulated using Space Vector Modulation (SVM) and applied to the motor’s 3-phase windings. Using shunt resistors, the current in each winding is monitored and compared to an electrical model that is based on the motor’s characteristics. The motor vendor supplies the motor’s winding characteristics,

although they can be measured using the inductance and resistance values of the windings. Rotor position calculation is performed by indirectly measuring Back Electromotive Force (EMF) based on a motor model. Back EMF is extracted from the motor’s model by inferring the estimated currents, which equal the measured current.

Taking the FOC approach yields many benefits to PMSM motor power management. For instance, FOC improves the dynamic response of PMSM motors, benefiting appliances like washing machines that need to quickly respond to speed changes involving both the agitation and spin processes. FOC makes this possible by allowing the optimal torque production, which uses less current, since it controls the amplitude and phase of the currents in order to keep the stator and rotor magnetic fields at 90 degrees. Also, since FOC allows for controlling the currents of the motor every PWM cycle, the current is inherently limited.

Traditional control methods for BLDC motors drive the stator in a six-step fashion, generating oscillations on the produced torque. In this scenario, a pair of windings is energised until the rotor reaches the next position, then the motor is commutated to the next step. Using FOC, the motor is continuously commutated in a Sine-wave fashion with controlled phases of the currents. So, torque production remains linear as the motor rotates. Since torque production is continuously commutated, the torque ripple is removed, thus reducing mechanical oscillations on the motor. This reduction of mechanical oscillations reduces audible noise significantly and allows designers to build appliances, such as washing machines, that feature quieter washer and compressor operations.

By using DSCs in an appliance design, it is possible to develop software-based motor systems that allow the rapid customisation of newer models to address multiple markets. For example, motor control using DSCs and FOC algorithm can create a common platform which is able to handle different models of washing machines. Likewise, air conditioners and refrigerator compressors could be addressed by a single platform. The only changes that would be required are to the FOC algorithm parameters, with no modifications to the algorithm core, the control-board hardware or the DSC.