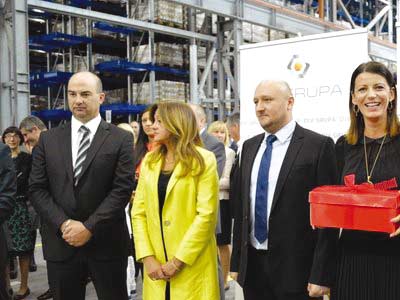 The DIV Group opened a new screw factory in the town of Knin, about 100 km north of the coastal city of Split. The investment is valued at EUR 35 million and will create 400 jobs.
DIV believes that this could mean a further 350 jobs for logistic and other external services for the company.

An increased demand and growing number of orders from Europe for screws has led to DIV deciding to invest in expanding its capacities and to construct the new factory in Knin as the current capacities cannot meet demands, DIV’s owner Tomislav Debeljak said at the opening.
He noted that goods exported accounted for 65% of DIV’s business and that this year exports could be as high as 85%.

The Knin factory will produce goods solely for export and these could be valued as high as EUR 130 million.

The investment in Knin was made possible mostly due to the company’s own resources from retained profits of EUR 25 million and a loan from the Croatian Bank of Reconstruction and Development valued at EUR 10 million.

Without the shipbuilding industry being counted, DIV is the leading screw manufacturer in Europe and conducts its business at eight locations in six countries and employs over 1,000 people.

DIV recently took over the Split-based Brodosplit shipyard and once the first phase of reconstruction is completed at the docks, in addition to this newest factory in Knin, DIV will employ more than 3,300 workers, the company reported.