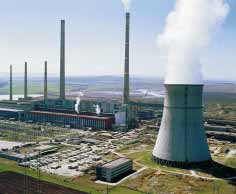 The stages of its implementation are being presently clarified.
The selection of a main contractor and subcontractors is forthcoming.

A green light was given in December 2004 for the implementation of a project for the construction of desulphurization installations at Units 5 and 6 of the largest thermal power plant in Bulgaria, Maritsa East 2, according to information from the Bulgarian Ministry of Energy and Energy Resources (MEER). The objective of the project implementation is the reduction of the generated sulphur dioxide emissions in the atmosphere of about 94% by using a wet lime method for their capturing.

The project value is about EUR 75 mln. Part of the funding to the amount of EUR 36.165 mln was provided following the European Commission ISPA program in the form of a grant. This is the first project, financed by ISPA in the region of South-Eastern Europe, related to air preservation, informed from MEER. In December last year, a credit agreement was signed between the Maritsa East 2 TPP and the European Bank for Reconstruction and Development for the amount of EUR 22 mln own funds plus EUR 12 mln syndicated loan from RFB, CALYON and Citi Bank. The rest of the financial resources for the project implementation shall be provided by the plant.

According to the information from the MEER press-center, the project implementation is of primary significance for the country since it is related to the fulfillment of the requirements of Directive 2001/80/ÅÑ for the reduction of the emissions generated in the atmospheric air by large fuel installations; the Oslo protocol for the reduction of sulphur emissions and the Convention on Long-range Transboundary Air Pollution and the protocols to it. Presently, the emissions of sulphur and nitrogen oxides and the dust oxides, generated by the plant are over the admissible limits. "The construction of desulphurization installations at the Maritsa East 2 TPP will make possible the use of lignite coal in the region in the future", were the MEER press center comments. Work on the final planning of the project implementation is presently performed. The next stage, as announced by MEER, will be the selection of a main contractor and subcontractors.

In 2002, desulphurization installations have already been built and commissioned in normal operation at the Maritsa East 2 Units 7 and 8. The achieved degree of the harmful sulphur dioxide emissions purification is to the amount of 90%. For comparison, the total project value was EUR 65.467 mln. The funding was provided through the European Bank for Reconstruction and Development, the European Investment Bank and the PHARE program.