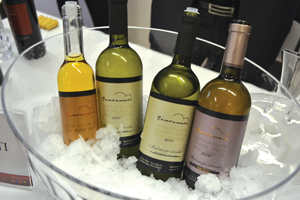 Croatia has two main wine regions: Continental (Kontinetalna) and Coastal (Primorska), which includes the islands. Each of the main regions is divided into sub-regions which are divided yet further into smaller wine hills and districts. Altogether, there are more than 300 geographically-defined wine-producing areas in Croatia.

White wine is dominant in Croatia (around two of every three bottles), particularly in inland regions, where only 10% of the total annual production is red. Grasevina (Welschriesling) has long been the preferred white wine grape in Croatian vineyards, accompanied by localized specialties Bogdanusa (a vine so reliable and prolific that its name means ’godsend’), Grk and Posip, and Vugava.

The varietal portfolio of Croatian white wines has broadened in line with the country’s wine-export ambitions, and now includes a number of international varieties such as Chardonnay, Sauvignon Blanc, Pinot Gris and Riesling.

The favored red wine grapes are a melange of long-established local varieties and French imports. The former group includes Terlan (a member of the wider Refosco family) and Plavac Mali. The latter centers around the inevitable Bordeaux wine grapes Cabernet Sauvignon and Merlot.

At present, wine production in Croatia is increasing and improving steadily, with newly developing export markets now being added to a well-established domestic market. Younger winemakers are actively seeking to raise the country’s profile.

At the same time, longer-established domestic producers such as Dingae, a leading red wine producer located on the steep slopes of the Peljesac Peninsula near the medieval city of Dubrovnik, has investing heavily in new equipment.
Bosnia and Herzegovina and Germany are Croatia’s leading export destinations.