Co-operation for wind farm projects in Bulgaria and Turkey 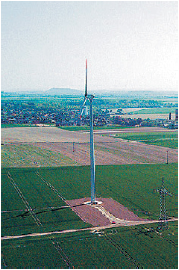 The wind farm project company Plambeck Neue Energien AG, in Cuxhaven, continues to give its core business international reach. Two joint-venture contracts which envisage the establishment of joint companies to develop and implement wind farm projects in Bulgaria and Turkey are finally agreed on 9th November 2007.

The partner for the joint venture in Turkey is

Plambeck Neue Energien AG will have an 80 per cent majority stake in the joint venture in which the wind farm projects with up to 450 MW of installable rated output are to be set up. The projects are at different stages of development. These wind farm projects planned for completion from 2010 will entail up to EUR 640 million of investment.

is the partner in the Bulgarian joint venture. Plambeck Neue Energien AG will likewise hold an 80 per cent majority stake in the company. The joint venture will see wind farm projects with up to 250 MW of installable rated output and which are equally at various stages of development. These wind farm projects planned from 2010 will entail investment of up to EUR 350 million.

The respective partners in the joint venture projects will take on the development of the wind farm projects until completion. Plambeck Neue Energien AG is to be responsible for the selection and procurement of the wind power facilities, financing the project and sales as well as the commercial and technical operational management when the wind farms come on line.

The core business of

- a company totally committed to the use of natural, renewable energy sources – is development, project management, realisation, financing and operation of the windfarm projects. The main business field in this is the utilisation of wind power both onshore and offshore. Since 1995 Plambeck Neue Energien’s vision for the future has meant expansion into international and offshore markets.

“Protecting the environment and climate by reducing harmful emissions is our number one priority. The need for renewable energy sources is growing world-wide, while fossil fuel resources, such as oil, gas and coal, are in limited supply. This pressure is producing a growing number of renewable energy projects with positive consequences for the environment”, says the official source of the company.

The Plambeck Neue Energien AG has been involved in the implementation of wind park projects since the end of 1995. Until today it realized 83 wind farms in Germany onshore with 476 wind turbines and an total output of 644,75 MW. The company has been developing wind farms since late 1995 starting with the foundation of the Windpark Marschland GmbH. At this time the company began to search for other appropriate wind farm sites. The project list currently includes a great number of windfarm sites onshore in Germany which are in the realisation or development. Furthermore, Plambeck Neue Energien is working intensively on new projects in the field of offshore wind energy plus wind farm projects in Europe.

In its role as a wind park project manager Plambeck Neue Energien AG has a keen interest in applying innovative technologies to improve the operational results of wind farms. This together with the large market perspectives for innovative rotor blades was the fundamental reason why the company acquired share of the Danish SSP Technology A/S in May 2003. SSP Technonlogy developes and produces rotor blades that are lighter, more efficient and considerably more durable than those previously used on the market.

Plambeck Neue Energien AG’s goal is to perpetuate the widespread use of ecologically sound and economically viable, renewable energy sources. The market of the future is the intensive exploitation of wind for energy generation not only offshore but also in many European states as well. The future will be marked by the use of renewable energies on the basis of solar radiation. According to science and policy estimates, renewable sources will account for 50% of total energy production throughout Europe by 2050, says the information by the company.