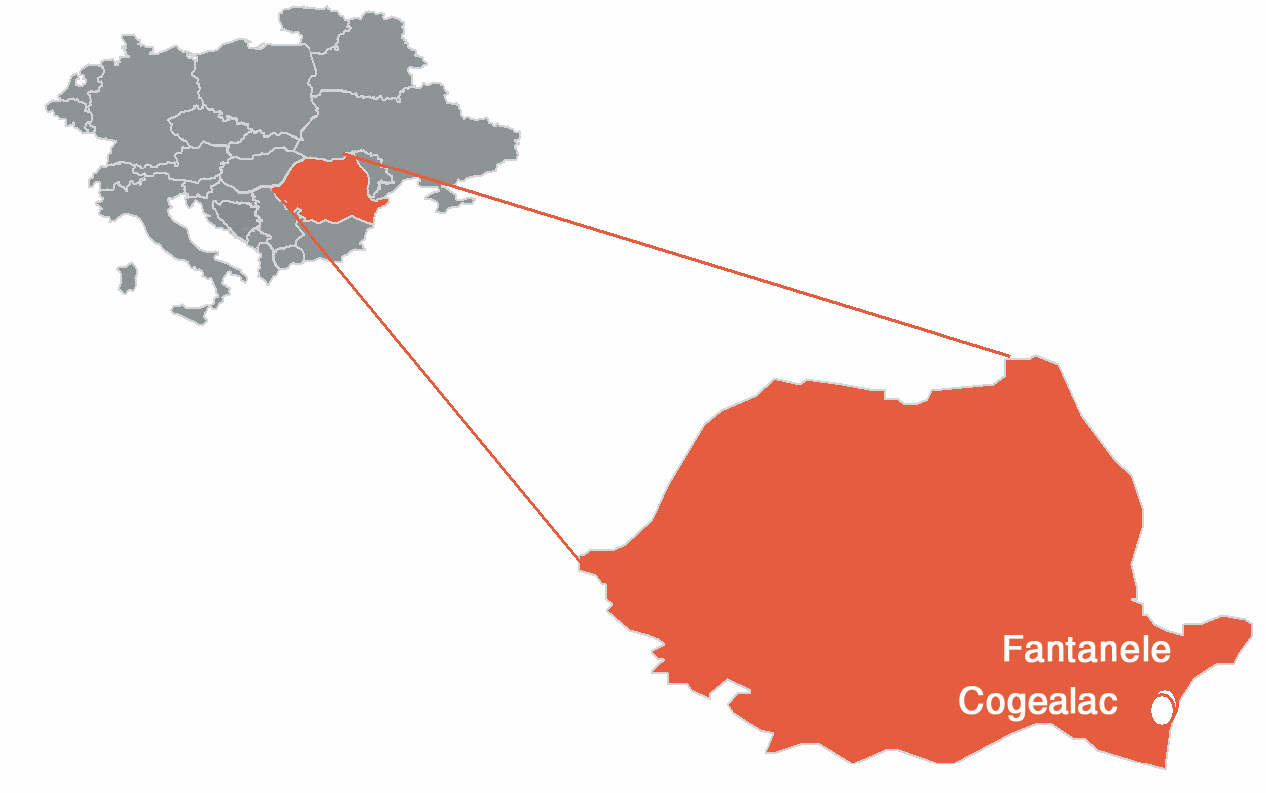 CEZ Group, the leading CE power utility, and Continental Wind Partners LLC, a major renewable power developer, concluded the sale of CWP’s adjacent Fantanele and Cogealac wind farms in Romania to CEZ at the end of August 2008. The two projects will together be the largest onshore wind farm in Europe, with a total capacity of 600 megawatts, approximately double the size of the next largest fully permitted onshore wind farm in Europe, and triple the size of the largest current operational wind farm in Europe. The total investment of the CEZ Group into the project will reach 1.1 billion.

The windfarm will represent almost 30% of the renewable market in Romania
Fantanele and Cogealac are situated in the Dobrogea province, north of Constanta, about 17 kilometers from the Black Sea. The project will become operational in stages. The first stage of 347.5 MW will comprise 139 GE 2.5xl turbines with a 100-meter hub height and 99-meter rotor diameters and a 2.5 megawatt capacity and will be operational by end of 2009. The second stage of 252.5 MW will be operational by end 2010. The construction will begin next month. Wind speeds are excellent, and the project is carefully situated to minimize environmental impact. The windfarm will represent almost 30% of the renewable market in Romania (including large hydro) when it becomes fully operational. It is the first significant wind project to be realized in Romania, which today has only 7 MW of operational wind energy production.
“This wind farm project will strengthen the position of the CEZ Group in Romania itself and enlarges our activities in the electricity generation sector there. The project has all necessary licenses and permissions including guaranteed connection to the grid and the hardware for the first stage has already been fully contracted. Investment into renewables is one of the strategic measures we are taking to respond to the adopted energy-climatic package of the EU. In addition to that, we are also concentrating on extending our production portfolio by gas power plants and further nuclear power plants using as another way to meet our targets of reducing CO2 emissions,” said Martin Roman, Chairman of the Board and CEO of CEZ.

The construction of the wind farm will be managed by CWP
CWP will manage the construction of the wind farm, which will be built by major international construction firms. All related technical components of the project (transformers, cables, etc) are secured and will arrive on site in time to commence operations according to schedule. “CWP has been very excited about the potential of the Romanian market since it began development here more than two years ago, and we are very pleased to have found a partner in CEZ which shares our enthusiasm and excitement about this extraordinary project and this extraordinary country - nothing could give the management and shareholders of CWP more pleasure than seeing this ground-breaking project be completed and seeing it transform the Romanian market for renewable energy”, said Mark Crandall, Chairman and founder of CWP.

Continental Wind Partners LLC
CWP was established in 2006 to finance the development of wind farms in Romania and Poland. Since then it has expanded into other European countries as well as Australia and New Zealand. CWP’s pipeline of projects currently totals more than 4,500 megawatts of wind assets in different stages of development and it continues to expand aggressively through new partnerships with local developers.
CWP together with its local partners secures land rights, measures and analyses wind resources, designs wind farms, obtains planning consents, selects and procures turbines and other necessary equipment, studies the environmental impact of potential sites, signs long-term sales contracts for the electricity output, and accomplishes all the other tasks which lead to the creation of a buildable wind farm.

About CEZ Group
CEZ is the leading European utility with almost 7 million customers and generation portfolio of 14 300 MW of installed capacity. Its market capitalization exceeds 30 billion EUR. Its shares are traded on Prague and Warsaw stock exchange. Apart from its home base in the Czech Republic, the CEZ Group is active in 10 countries of Central and Southeastern Europe (CSEE).
In Bulgaria, it owns the distribution and supply providing electricity to 1.9 million customers and the largest hard-coal power plant in Varna. In neighbouring Romania, it distributes and supplies power to 1.4 million customers. CEZ Group also owns two power generation companies in Poland and actively trades electricity in all countries of CSEE. In December 2007 CEZ and Hungarian oil and gas company MOL created strategic alliance focusing on gas-fired power generation. Recently CEZ in consortium with Turkish Akkoek Group has won a tender for operation of the Turkish distribution company Sedas.