Bulgarian engineering companies in the EU 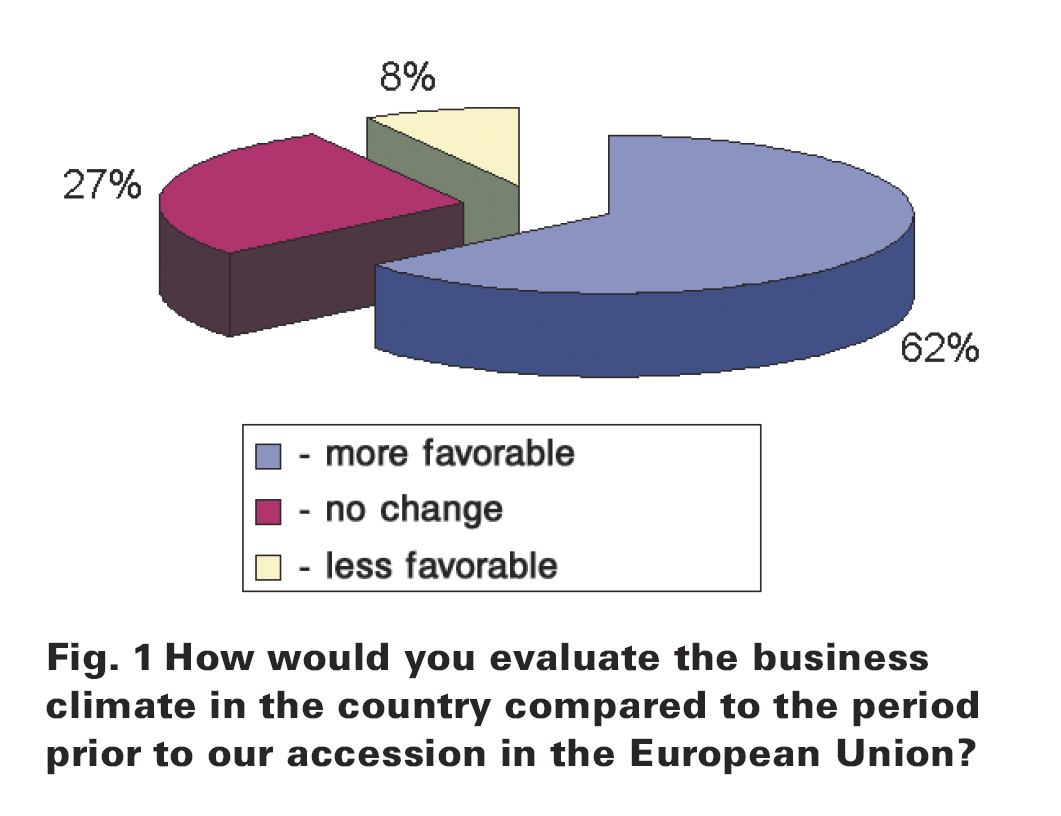 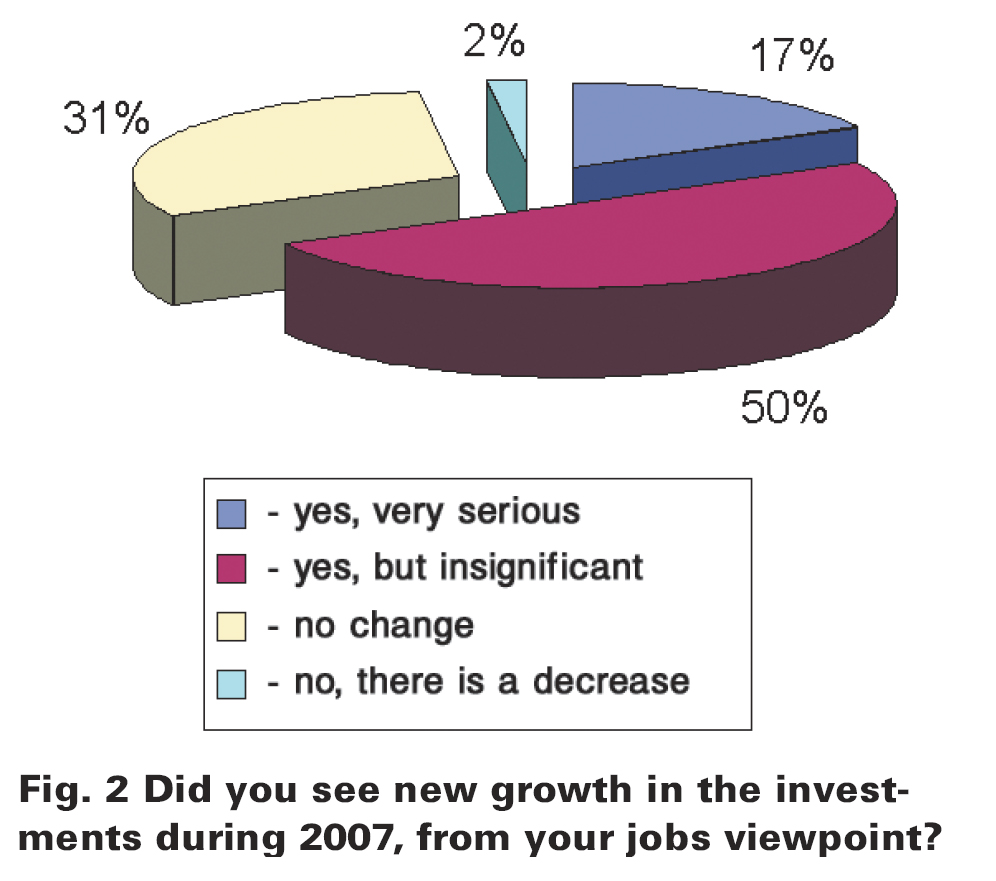 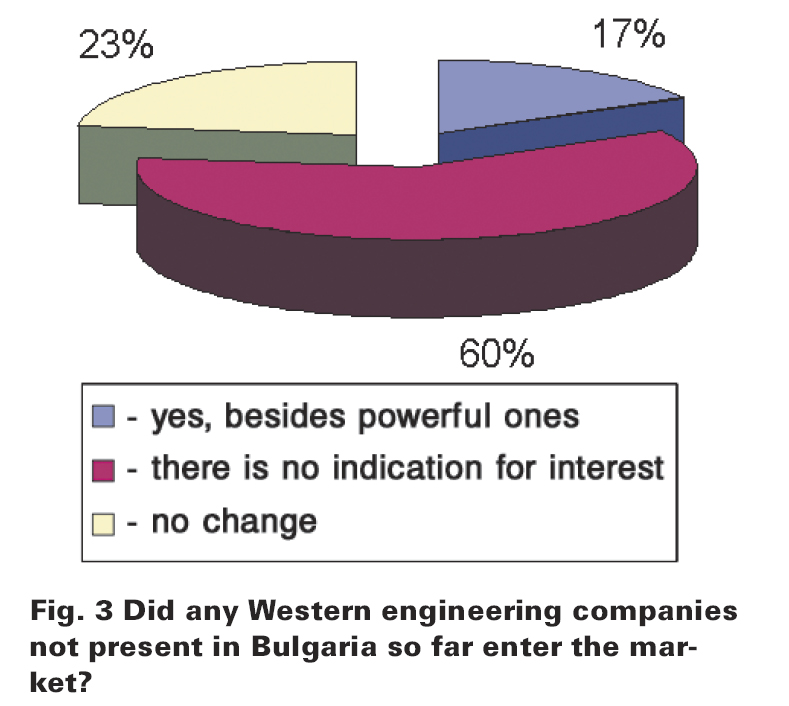 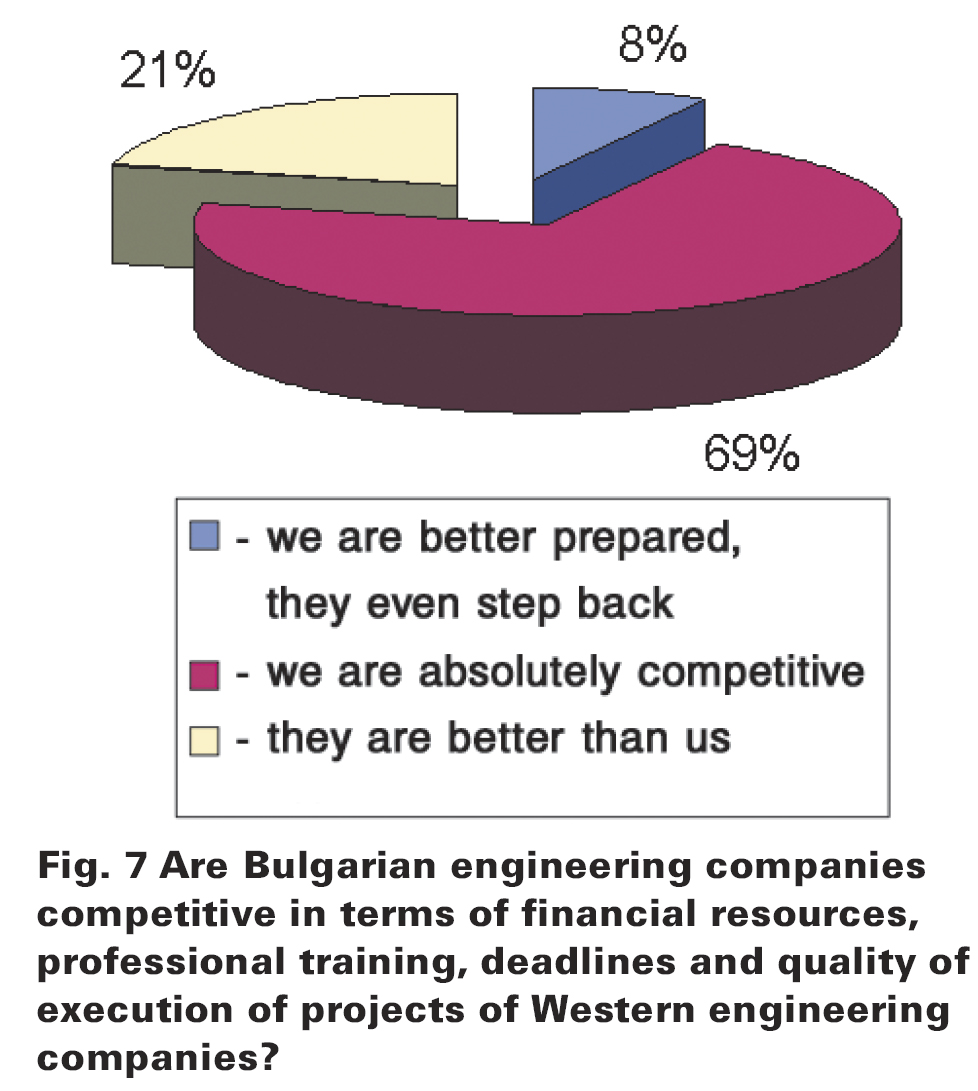 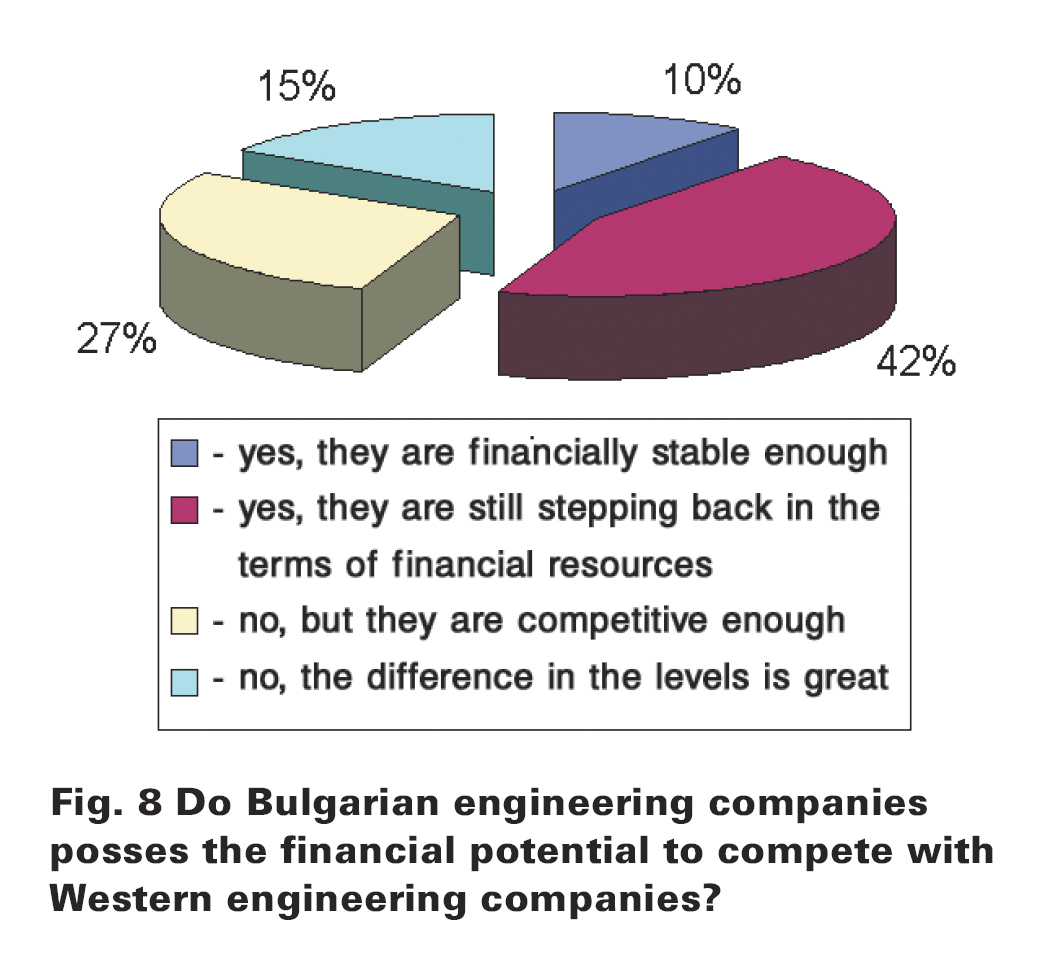 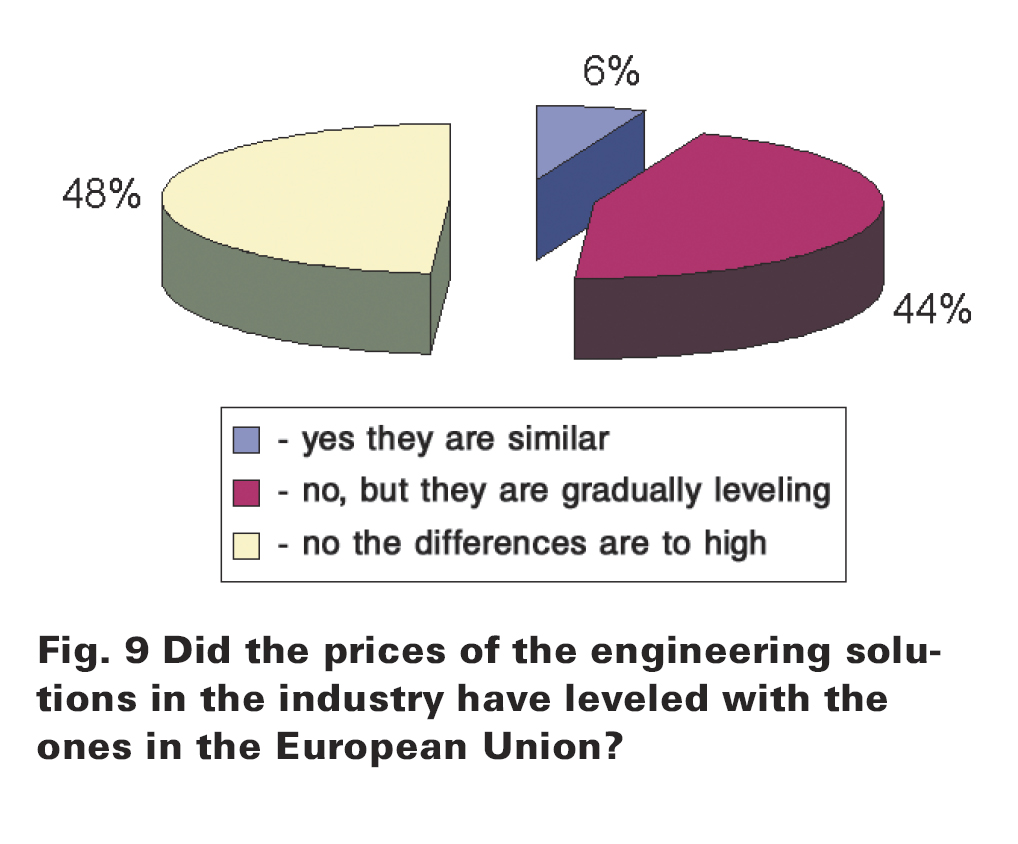 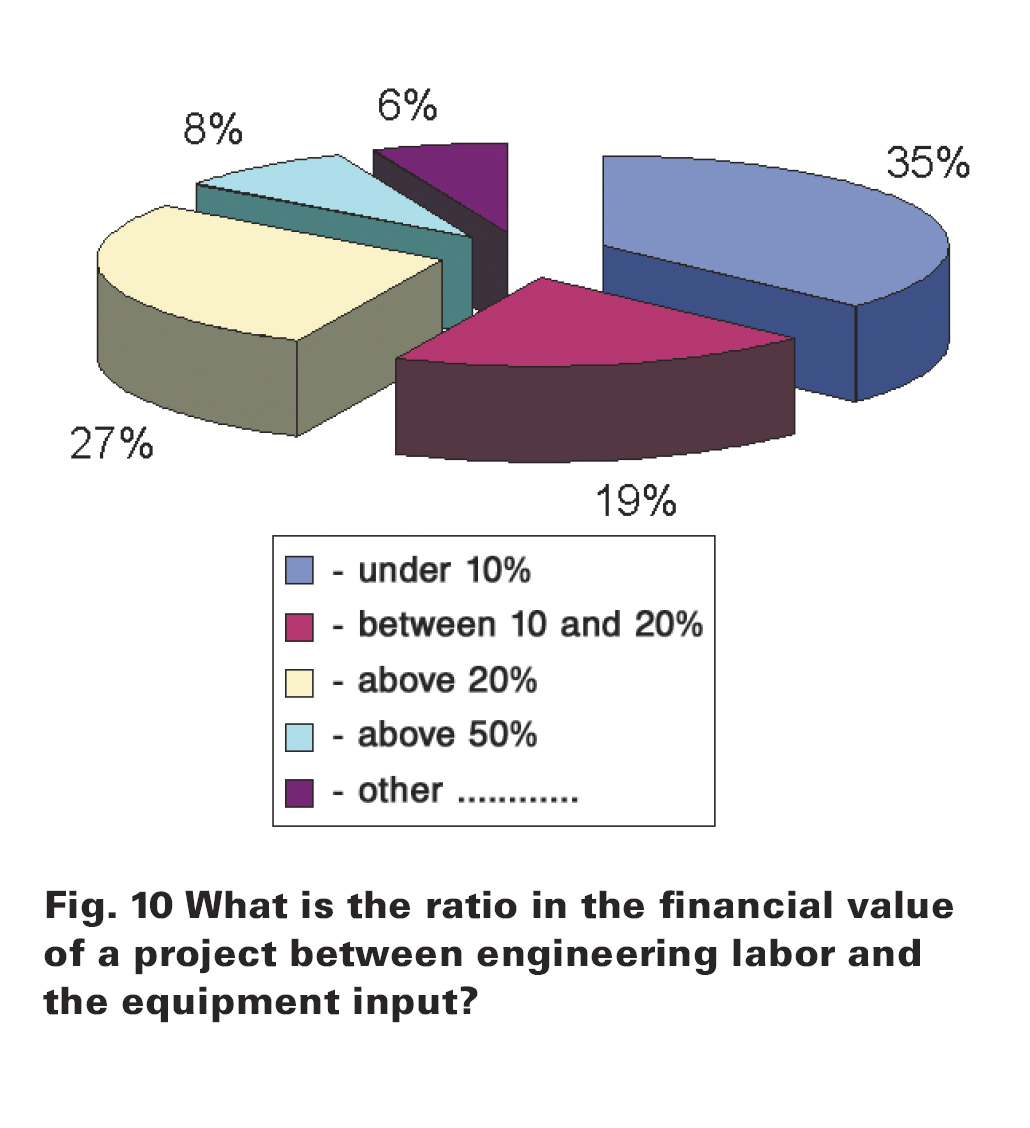 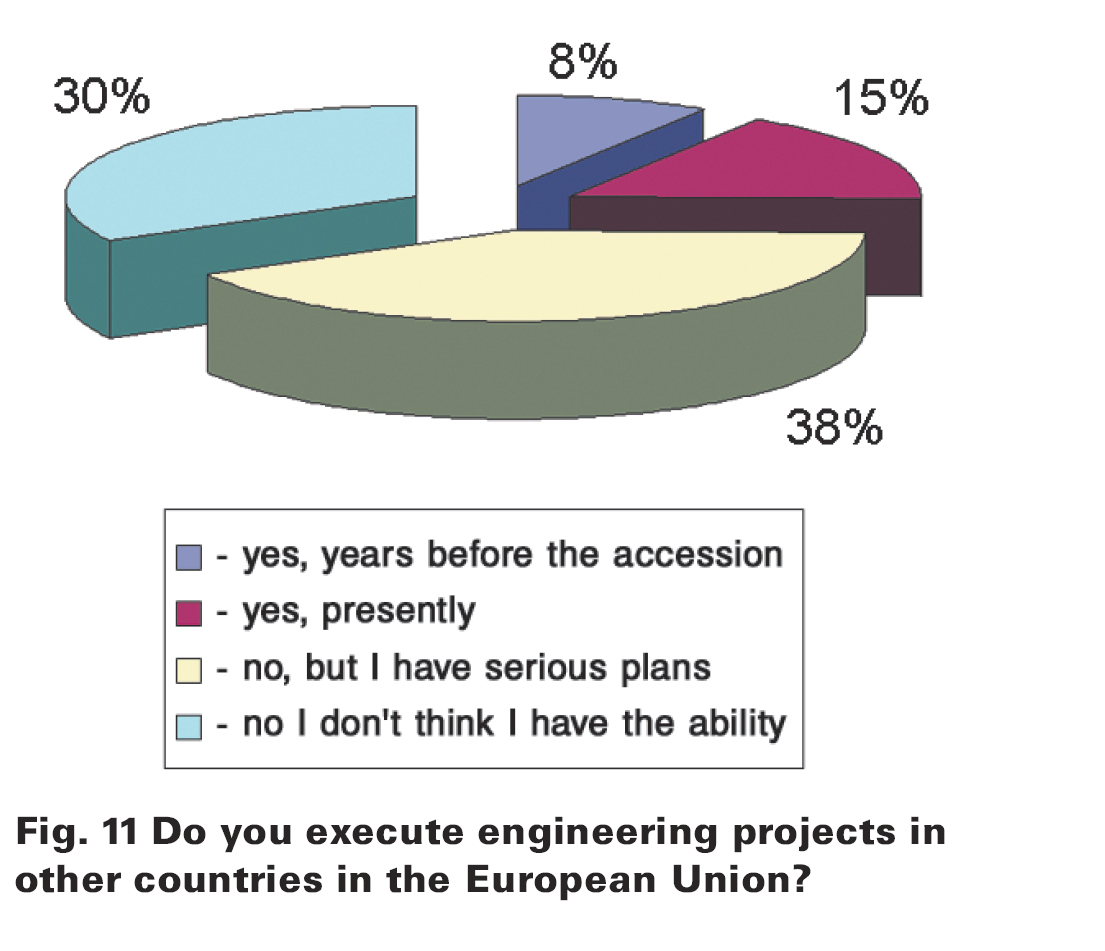 TLL Media Publishing House carried out a large-scale marketing research among engineering companies in the field of industry. With the joint efforts of the whole team the editors investigated, inquired and analyzed the business moods among a representative portion of the engineering companies operating in industry in relation to the end of the first year of Bulgarian membership in the European Union. Up to “closing” the issue by the editors 52 engineering companies took part in the marketing research. We would like to thank our colleagues who responded to our initiative. Due to the large scope of the engineering branch, our editor’s office would like to apologize to those companies we probably missed to invite to participate by sharing their opinions on this subject.

As well as active behaviour in searching for business opportunities outside the borders of our country. The predominant share of questioned companies have not yet taken advantage of European development programs but around 1/3 of them are in the process of preparation for that and another 1/3 “see” certain opportunities in this area. Among answers to the question what fields display the most serious investment interests, 40% pointed out to construction, and 33% - power engineering. Immediately after those branches but with the far more modest 12% follow the food and beverage industry and tourism. There is also potential for development in the construction material production, telecommunications, metallurgy, pharmacy and processing industry.

More than 1/3 or 38% pointed out to power engineering as the sector in which most serious investment interests are to be expected in the future, followed by construction (15%), tourism (10%), infrastructure and machine engineering with 8% each.

Today the business climate is more favorable than in the year 2006.

With our next two questions we turned to the engineering branch for an opinion whether and to what extent Bulgarian industry has become “more attractive” for foreign competitive engineering companies after our accession in the European Union. The question “Did any Western engineering companies not present in Bulgaria so far enter the market” (Fig. 3) 17% of the inquired companies answered affirmatively emphasizing that powerful Western companies are concerned. More than half of them, however, were more moderate in their answers and they thought there were indications of interest on the part of Western engineering companies new for the Bulgarian market. Twenty-three percent of the inquired persons do not see any changes at the market.

In contrast to the above, there was no prevailing opinion to the next question “Did the interest in the Bulgarian market by foreign engineering companies represented here increase after 1.01.2007” (Fig. 4). Approximately the same share of the inquired companies believe that the interest by foreign companies in our market has increased considerably (37%), while 35% “see” only an insignificant change in a positive direction. Respectively, 23% do not see any change. Only 2% of participants in the research think that after our acceptance as members of the European Union the interest of foreign companies represented in Bulgaria decreased.

Almost half or 48% of the participants in our research share the opinion that the prices in engineering services in the field of industry in Bulgaria are still much lower that in other member-states of the European Union (Fig. 9). Just 6% of the inquired define the prices of engineering services as similar to those in other member-states. The remaining 44% think the prices have not yet become equal but are getting closer.

Engineering labour is 4 times cheaper than the equipment

The following question is directly related to price formation of engineering services in Bulgaria and in other countries in the European Union: “What is the ratio in the financial value of a project between engineering labour and the equipment input?”. Thirty-five percent of the participants chose not to answer that question. The remaining answers are extremely diverse. Nevertheless, a greater part of the answers are concentrated around the ratio of 20% engineering labour to 80% technical equipment or close to that. Some of the persons inquired have pointed out to even more unfavourable for the price of labour ratios, for example 10%/90%. The highest price of engineering labour compared to the equipment input pointed pout by participants in the inquiry is 60%/40%. The representatives of Bulgarian engineering business have also pointed to a ratio of 50%/50% in the financial value of one project of engineering labour compared to equipment used. Along with the options listed, in some of the questionnaires other ratios were also pointed out but due to their negligibly small share and proximity to those already mentioned we will not quote them here.

We tried to “shed some light” by means of this questionnaire on an issue very important for the branch, namely whether Bulgarian engineering companies use domestically manufactured equipment with industrial application in execution of their projects. The results are quire expressive – 35% of those who filled in the questionnaire answered that the share of Bulgarian commodities in executed projects is below 10% (Fig. 10). What is interesting is the fact that a company among the inquired ones has pointed out that 99% of the equipment it uses is domestically manufactured, which is only logical in view of the fact that the company is a manufacturer of C&I automated equipment. The share of Bulgarian commodities input by 19% of the participants in the implemented projects is between 10 and 20%. More than 20% is the share of Bulgarian commodities input in projects realized by 27% of participants in the inquiry. Only 8% of the Bulgarian engineering companies specified that more than 50% of the commodities input in the projects are manufactured in Bulgaria.

23% are already working in other EU member-states

After our joining the European Union, along with the expansion of foreign engineering companies, it is logically to ask if Bulgarian engineering branch feels ready to “attack” the markets of other member-states of the European Union. In reply to the question “Do you execute engineering projects in other countries in the European Union”, 8% of the inquired companies specify that they are already working in the union and they had worked for years before our accession (Fig. 11). On the other hand, 15% of the inquired companies have recently begun to implement engineering projects in EU member-states. A serious share of the companies inquired – 38%, are not yet working in other countries from the community but declare serious plans in that direction. Also, a relatively large share – 30% of participants in the inquiry not only do not implement projects in EU countries but also indicate that they do not have any such capacities.

With our next question: “Are you working in any other countries outside the European Union?” we tried to find out to what extent Bulgarian engineering market is “open” to the execution of projects in neighbouring countries, Russia and the CIS countries, the Near East, Asia, the USA, etc. Completely logical, bearing in mind the closeness both in geography and in economy, and even in the social aspects, 33% of the companies pointed out that they are working in neighbouring countries (Fig. 12). The share of Bulgarian engineering companies executing projects in Russia and the CIS countries is relatively smaller – 12%. Immediately after them, with a share of ten percent are the engineering companies working in Asia. Just 2% of the inquired companies have pointed out the USA as an answer. Another interesting fact is that 23% from the inquired companies that declared their intentions of expanding their acitivty point out to countries outside the EU. Nineteen percent of the participants answered they do not work in countries outside the community and do not plan to do so. The sum of percents displayed in Fig. 13 is greater than 100 because some participants have pointed oput to more than one answer.

Bulgarian projects 95%/projects in other countries 5%

The question that followed was directly linked to the previous two questions: “What is the share of projects executed by you in the country as to projects in other countries?”. The answers were quite diverse. Nevertheless, there is a sufficiently large share of participants in the inquiry whose answers were the same or close to the 95%/5% ratio. Also, the share of inquired companies that pointed out to 100% or 99% of engineering projects executed in Bulgaria only is not small. There is another inquiry to the quite opposite position where it is stated that the ratio between projects implemented in the country and those implemented in foreign countries is 2%/98%. There were answers such as 30%/70%, 40%/60%, as well as 60%/40% and 80%/20% within the range between the above extreme borderline answers.

The remaining questions from the inquiry of the Engineering Review magazine refer to knowledge of European legislation, of common European standards, European development programs, as well as the current status of the structural development plans of Bulgarian engineering companies. The summarized results of the answers to those questions have been displayed graphically.