Bulgaria and Romania - members of the EU 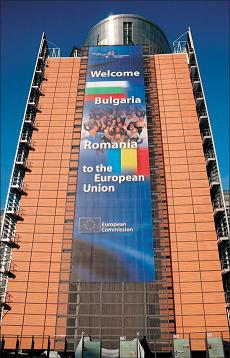 Kosovo to build its biggest wind farm with a 58 mln. euro loan

On 1 January 2007 Bulgaria and Romania have become full members of the EU, whose membership now stands at 27. After seven years of preparation, their accession marks the completion of the sixth EU enlargement. With Bulgaria and Romania entry the EU is welcoming 30 million new citizens.

Bulgaria and Romania applied for membership of the European Union in 1995 and accession negotiations with both countries were opened in February 2000. In 2002, the European Council announced its objective was to welcome Bulgaria and Romania into European Union in 2007, provided they made sufficient progress in fulfilling the membership criteria. Accession negotiations were completed in December 2004 and the Accession Treaty was signed in April 2005.

The excitement and the curiosity of most of the Bulgarians and Romanians of joining EU faded along with the national celebrations’ excitement in the New Year’s eve. Today the life is going on the same way as before January 1st. Only the business and the tourists can feel any significant changes. The non-clarified changes in customs’, accounting and other documentation, some problems with the border authorities, for instance (which were rapidly solved) as well as other EU-joining related problems, gave way to the everyday-life duties. Still, more immediate are the serious “wounds” of the two new member countries, which EC requires to be “cured”, and for solving of which Romania and Bulgaria rely on the EU-joining. It concerns tackling with organized crime and corruption, adapting the legal systems and guaranteeing food safety. To ensure this work continues beyond accession, the Commission has put forward a package of transitional measures to prevent or remedy any persistent shortcomings and ensure the smooth integration of both countries.

BG and RO Business luggage to the way to Europe

Despite the apocalyptic picture after the joining of Bulgaria and Romania, which West European press predicted, that “terror” did not happen at all. “Crowds of hungry savages” have not “attacked” the peace of the member countries and have not damaged their economies. Even less developed, peripherial and accepted as last (for the time being), the two countries continue developing, with the private sector having confidence and ambitions to improve its level and to prosper in the EU.

According to the European statistics[1], back in 2004 the business economy (Industry, construction and non-financial services) in Bulgaria consisted of around 240 000 enterprises, which generated EUR 52 billion of turnover and employed 1.8 million people. In Romania, there were close to 380 000 enterprises, which generated turnover of EUR 110 billion and employed just over four million people. The size of the business economy in Bulgaria equalled 1.5% of the EU-25 total in terms of employment, 1.3% in terms of number of enterprises, but only 0.3% in terms of turnover. There was a similar trend in Romania, where the corresponding shares were 3.4% (persons employed), 2.1% (number of enterprises) and 0.6% (turnover).

The shares were even lower for value added. The value added generated per person employed (apparent labour productivity) in both Bulgaria (EUR 4 700) and Romania (EUR 5 400) were also around one tenth of the EU-25 average. However, average personnel costs were even lower (EUR 2 500 in Bulgaria and EUR 2 800 in Romania), which resulted in a wage adjusted labour productivity around 30% higher than the EU-25 average. As regards profitability, the gross operating surplus was equal to 8.8% of turnover (gross operating rate) in Bulgaria and 9.7% in Romania, 20% and 10% respectively below the EU-25 average.

The South-East European Industrial Market magazine is an official media partner of the international trade show Solar PV World 2020, which will take place in the China Import and Export Fair Complex in Guangzhou...

The latest issue 1/2020 of South-East European Industrial Market is already available online! The cover story of the edition is dedicated to the plastic and rubber processing machinery sector in Turkey. You may find the whole content here...

"Turkish machinery producers are committed to be strong business partners of Bulgaria", said Kutlu Karavelioglu, Chairman of the Turkish Machinery Exporters Association, in an exclusive interview...

The newest issue 1/2020 of SEEIM features the editiorial "Lighting products and systems manufacturers in Bulgaria". Read the article to find an interesting market overview of this sector in the country...