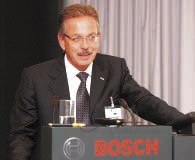 Following approval by the antitrust authorities, Bosch has now closed the acquisition of 44.76 percent of the shares in Ersol Solar Energy AG, Erfurt, Germany, from Ventizz, the former majority shareholder. Furthermore, Bosch has already purchased an additional 29.34 percent of Ersol shares since it announced the acquisition. Together with the 11.38 percent of shares it has been offered in the voluntary public takeover offer, the company now has a total shareholding of 85.48 percent in Ersol. In addition to this shareholding, Bosch has, as already announced, reached an agreement with Ventizz on an option to acquire a further 5.69 percent of ersol shares. This option can be exercised in March 2009. This means that the total Bosch shareholding (including call option) in Ersol can be calculated to be 91.17 percent. The execution of a domination agreement is not contemplated. The legally required further acceptance period for the offer begins on August 14 and expires on August 27, 2008. The purchase price remains unchanged at 101.00 euros per share in cash.
Commenting on the closing of the acquisition of the majority shareholding, Dr. Siegfried Dais, deputy chairman of the Bosch board of management, said: “We are looking forward to the joint task of continuing Ersol’s successful development.” In the future, Ersol will be an independent “Solar Energy” division within the Industrial Technology business sector. It is planned that Dais should be chairman of the company’s new supervisory council, which has still to be constituted. “My special thanks go to Dr. Claus Beneking, who has been chairman of the board of management up to now. Without his inventiveness, vision, and determination, Ersol would not be so successful today,” said Dais. Beneking announced at the beginning of June that he would be standing down as chairman for personal reasons, but would remain associated with Ersol in a consultative capacity.

Expansion of renewable energy business
Ersol Solar Energy AG develops, manufactures, and sells wafer-based silicon solar cells, and also manufactures thin-film modules. Worldwide, this photovoltaics company generated sales of 160 million euros in 2007. For 2008, Ersol expects its sales to exceed 300 million euros. The company currently employs more than 1,000 associates at three locations.
With this acquisition, Bosch hopes to strengthen its business in the area of renewable energies. Bosch is already active in the market with many systems for utilizing renewable energies. With its existing activities in this area, it plans to generate sales of some 750 million euros in 2008. Bosch Rexroth, for example, supplies gear and drive technology for wind turbines, develops efficient drive concepts for the still young sector of marine energy generation, and supplies hydraulic adjusting systems for solar thermal power stations. In addition, Bosch Thermotechnology has become the market leader in the rapidly growing market for electric heat pumps, and is also a leading manufacturer of solar collectors for hot-water generation.

About Bosch Group
The Bosch Group is a leading global supplier of technology and services. In the areas of automotive and industrial technology, consumer goods, and building technology, some 271,000 associates generated sales of 46.3 billion euros in fiscal 2007. The Bosch Group comprises Robert Bosch GmbH and its more than 300 subsidiaries and regional companies in roughly 50 countries. This worldwide development, manufacturing, and sales network is the foundation for further growth. Each year, Bosch spends more than 3 billion euros for research and development, and applies for over 3,000 patents worldwide. The company was set up in Stuttgart in 1886 by Robert Bosch (1861-1942) as “Workshop for Precision Mechanics and Electrical Engineering.”
The special ownership structure of Robert Bosch GmbH guarantees the entrepreneurial freedom of the Bosch Group, making it possible for the company to plan over the long term and to undertake significant up-front investments in the safeguarding of its future. Robert Bosch Stiftung GmbH, a charitable foundation, holds Ninety-two percent of the share capital of Robert Bosch GmbH. Robert Bosch Industrietreuhand KG, an industrial trust, holds the majority of voting rights. The entrepreneurial ownership functions are carried out by the trust. The remaining shares are held by the Bosch family and by Robert Bosch GmbH.