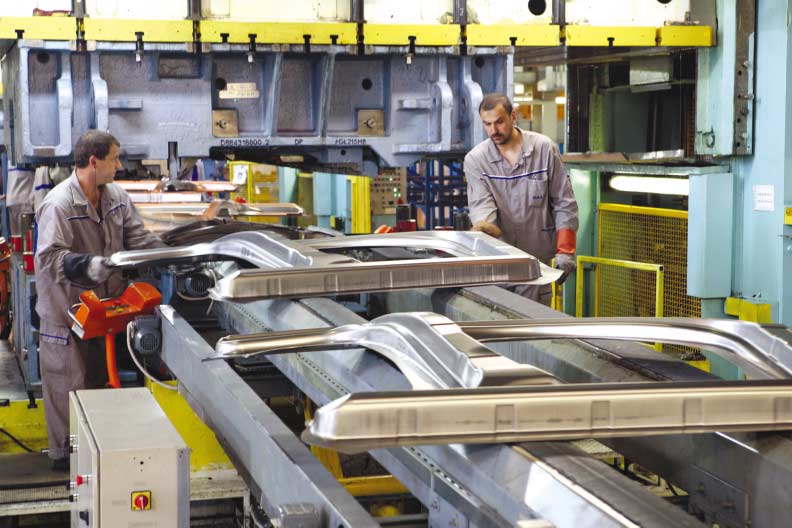 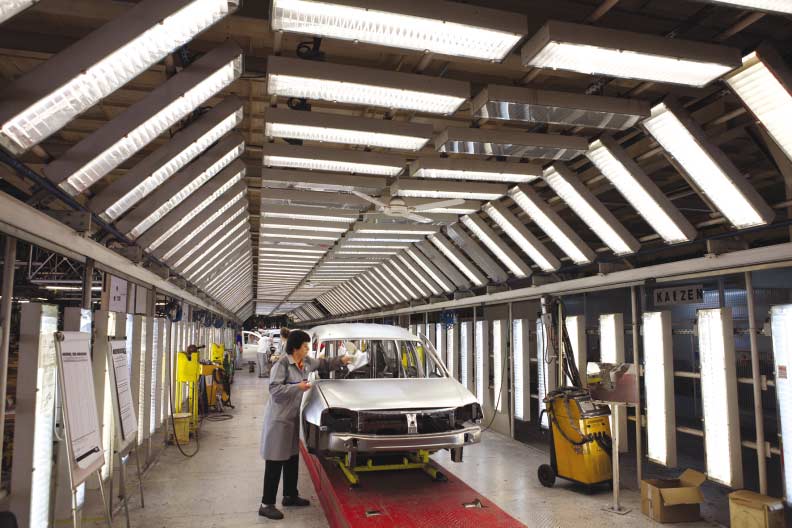 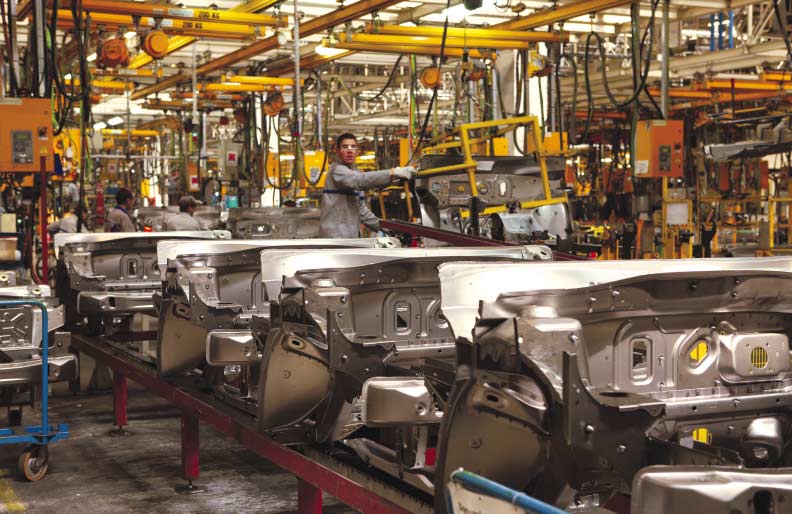 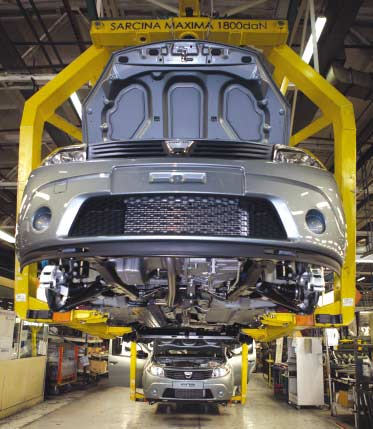 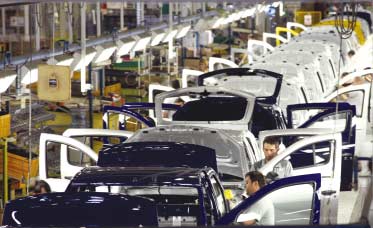 The automotive industry has been one of the most profitable sectors of the Romanian economy in recent years. Much of the Romanian manufacturing industry consists of branch plants of foreign firms, though there are some important domestic manufacturers, such as Automobile Dacia, Roman Brasov and Igero. Branch plants provide mainly blue collar jobs, with research and executive positions confined abroad.

Romania has a small but growing automotive cluster with a network of suppliers and components manufacturers. Most of the Romanian suppliers work in joint ventures with foreign partners, the Romanian party providing production facilities, utilities and engineering services, while the international car manufacturers bring in their brand, global know-how and services. These joint ventures produce for both the domestic market (e.g. for Renault-Dacia) and the overseas markets.

The potential for development of the automotive manufacturing industry is higher in Romania than the other countries of Central and Eastern Europe. To become more competitive, the Romanian automotive sector will have to continue to rely on foreign direct investment.

OEMs and Key Suppliers
Dacia: Twelve years ago the French Renault Group invested EUR 1.5 billion in Dacia which has a capacity of 350,000 cars per year. The company currently employs 13,823 workers. Approximately 91% of cars built at the Dacia are exported to 60 markets on four continents. In addition, sub-assemblies produced at Dacia provide the necessary components for plants in Morocco, Russia, Iran, India, Brazil, Colombia, and South Africa.

As of 2011, Ford Europe’s plans are to manufacture three vehicle models in Craiova: the light utility vehicle Transit Connect, a small class automobile, the B-Max, and a medium class utility vehicle, most likely the next generation Ford Transit, which will target the European market. Ford representatives announced that they would continue to invest in the Craiova subsidiary despite having to adjust its business plan and production targets in light of market conditions. By 2013 the Craiova factory will have installed production capacities able to produce 350,000 cars per year.

Automotive Supplier Base
The current situation provides new opportunities for suppliers of all tiers to these two manufacturers. Dacia and Ford have attracted and continue to attract significant investments in the auto components industry, as suppliers seek to locate nearer these assembly facilities.

For the auto components manufacturers, the presence of the two carmakers is extremely beneficial: Renault’s production has been steadily growing for the last six years, and Ford announced ambitious plans for the future: a production capacity of 300,000 cars and engines in 2013 and an actual production of at least 200,000 units.The production of Ford B-Max increased to 20 the number of automotive suppliers selling to its Craiova plant.

Car Part Industry
The car part industry in Romania took off in an impressive way after the 1999 takeover by Renault of Dacia, the main Romanian carmaker, located in Mioveni, Southern Romania. Since then, a number of traditional part suppliers for Renault have started investing in Romania, such as Auto Chassis International, Valeo, Euro APS, Johnson Controls, Autoliv of Sweden, Inergy of France, Euralcom, Michelin and Continental.

Battery manufacturer Rombat Bistrita exported about 65% of their output to countries like France, Spain, Portugal, Bulgaria, Germany, Austria, Ukraine, Finland, and Moldova. Another battery maker is Caranda based in Bucharest.

Over the last few years, American companies have started investing in both the Craiova manufacture and its environs, companies that supply parts for the US giant. They are names such as Johnson Controls, Bamesa, Kirchoff Automotive, Leoni Wiring Systems and Gestamp Automocion.

Component makers already present on the Romanian market became Ford’s suppliers too, such as Faurecia, which makes car seat covers in Sibiu County, central Romania, and Magnetto Wheels, based in Dragasani, in the South, which makes rims. German companies also invest heavily in car parts, in manufacturers mainly in the west and centre of the country.

For instance, the group Continental started with an investment worth 120 million Euro in a tyre factory in Timisoara. Eventually, it reached the point at which it now has eight production units and three research and development centres, most of them in Timisoara, but also in Sibiu, Carei, Arad and Iasi.

At least a dozen other German companies have placed investments throughout the country, and several major Japanese manufacturers as well, like Calsonic Kansei and Yazaki in Ploiesti, Southern Romania and Sumitomo in Alba Iulia, Deva and Orastie in the West.

Recent Investments
One of the recent investments was made by Japanese wiring harness company Yazaki in Caracal, in Romania’s Olt County.

The company invested more than 10 million euro in a new plant located within the Romanita textile factory where it has leased 6,000 square meters. Olt County was also the site of a larger investment by a Ford supplier: plastics and automotive interior manufacturer IAC Romania. Located in the town of Bals, the value of the investment is estimated at 58 million euro.

CML plans expanded its production capacity by 30-35% in 2011 and made new investments in production equipment and in upgrading the building infrastructure. Over 95% of the CML plant in Romania goes to export. Renault, Nissan, Peugeot-Citroen, Volkswagen, Audi, General Motors, Opel, Toyota, Honda, Mercedes, and Dacia are among the company’s clients.

Pirelli has constructed second production facility in Slatina, worth approximately 250 million EUR, and fellow tire maker Continental expanded its facility in Timisoara by investing 50 million EUR in the development of a new division.

In addition to the two major vehicle manufacturers currently producing in Romania, there are as several hundred companies that could be considered potential suppliers to the vehicle market (car or truck) as manufacturers of auto parts, sub-assemblies and components. Most of these Romanian firms are small enterprises and in the area of metalworking, and plastic and rubber components.

An overview of Romanian foreign trade in the automotive area shows increased exports of auto parts. Exports include tires, cabling, steering wheels, safety systems, car seats and upholstery, connectors, tire cords, and generally any part that involves a significant amount of labor, or anything that is unprofitable to manufacture in other countries.