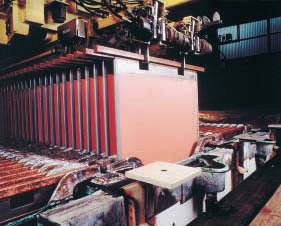 Investments in environmentally compliant facilities can be profitable, stated from Bulgarian subsidiary of the largest copper producer in Europe

Aurubis is the largest copper producer in Europe and the world leader in copper recycling. The company produce some 1 million tonnes of copper cathodes and more than 1.2 million tonnes of copper products each year. Aurubis has production sites in seven European countries with a total of about 4,7000 employees. The company core business is the production of marketable copper cathodes from copper concentrates, copper scrap and recycled raw materials.
In Bulgaria Aurubis owns Pirdop plant that is a connection to the Southeast European markets. Almost 800 employees produce anodes, cathodes and sulphuric acid here. The smelter was commissioned in 1958, and has since been regularly modernised and expanded so that Pirdop is a modern site within the Aurubis Group.

Aurubis Bulgaria
The copper producing plant of the Group is in the city of Pirdop, Bulgaria. The plant was built in 1958 and has several production units: Smelter, Refinery, Sulfuric Acid plant, and Flotation plant. In September 1997, the International Group Union Miniere with its head quarters in Brussels, Belgium signed a privatization contract with the Bulgarian government, thus acquiring the plant in Pirdop. On April 2005, the copper activities of Umicore were de-merged into a separate company Cumerio, listed on Brussels Euronext stock exchange.
In April 2008 Cumerio was acquired by the German Norddeutsche Affinerie AG (NA), after the approval of the European Commission at the beginning of the year. The new company became the largest copper producer in Europe a global leader in copper recycling. In 2008 the production of "Aurubis Bulgaria" was 264 895 t Anode copper, 126 853 t Cathode copper and 930 601 t Sulphuric acid.
Due to these investments significant improvements could be reached in all areas.
In April 2009 the official approval of the new name of the company "Aurubis" was received, and currently the plant is employing 780 people.

Aurubis’ environment achievements at the Pirdop production site
Aurubis Bulgaria is committed to the principles of sustainable development. Because the nature of the base metal industry has a considerable impact on the environment, Aurubis Bulgaria strives to minimize the interaction of its operations with the environment. In total, 350 million Euro have been invested since privatization in 1997 in the development of its operations, of which about 80 million Euro have been spent on direct environmental measures. An example of this is the investment in the amount of 10.4 million Euro during 2003/2005 in a new wastewater treatment plant to reduce the emissions in the discharged industrial water. In 2008 Aurubis Bulgaria implemented a project to install a new complex gas cleaning system consisting of dry and wet scrubbers (for emissions from anode furnaces and converters/flash furnace respectively) and a bag house filter involving capital expenditure of more than 12.5 million Euro.
"Among the competitive advantages of Aurubis are the improved processing possibilities for complex copper concentrates; economies of scale due to high processing volumes; flexibility due to 2 smelters; high smelter performance (technical and ecological benchmark", stated Nicolas Treand, Executive Director in Aurubis Bulgaria at Green Innovation Forum "How to grow your business through green investments?" on October 29 at the Hilton Hotel in Sofia.

Investments in environmentally compliant and cost efficient facilities
"Our new refinery for 82 mill. Euro is the largest industrial investment in the Bulgaria in 2008. It has ISA 2000 latest technology (Australia), fully automated machinery from Outotec (Finland), Fully automated handling system from Kuenz (Austria) and fully integrated computer control system (DCS). We made three types of environment investments in Aurubis. These are the engagement to operate under EU regulation (Gas cleaning), no return on investment, must have to stay in operation and investments linked to recycling ( Copper and Electronic Scrap ). Also we increase turnover, decrease waste and energy consumption. Aurubis Bulgaria also invests in energy efficiency projects ( Steam Turbine ) and try to decrease operational cost and energy consumption" added Mr. Treand.

The engagement to operate under EU regulation
Aurubis invests every year between 5M and 20M EUR to improve its environmental KPI. "We invest in environmentally compliant and cost efficient facilities. With our latest installation of gas cleaning, we reach parameters beyond expectation and EU regulation. We are proud to be amongst the best three in worldwide. The Gas cleaning installation is a cost and we cannot expect financial return. However , we are proud to contribute to a better leaving with our campaign "We care for the air"", stated the Executive Director of

Aurubis Bulgaria. Recycling of Copper
"Virtually all products made from copper can be recycled. Aurubis invests in technologies allowing us to recycle copper. Whether in a raw state or contained in a finished product, copper is recyclable at all stages of a product’s life cycle. Assuming an average life span of 30 years for most copper- based products, copper’s true recycling rate has been calculated to be about 80- 85%. Copper can be considered a "renewable" resource because it can be recycled without any loss of quality (chemical or physical properties). In some instances, recycled copper can be remelted and used without further processing. Not only does recycling copper result in more efficient use of natural resources, it also results in energy savings and a reduction of waste sent to landfills", said Mr. Treand.

Recycling Process investments
"This investment is very helpful for environment. We process today about 20 000 t of copper scrap annually, this corresponds to a saving of 100 000 t of concentrate extracted from earth. This is as well saving about 60 000 t of waste. This generates about 6 M EUR extra revenue compared to concentrate processing. Also this saves energy and waste management cost to about 600 K EUR. Our initial investment to upgrade our installation to treat scrap round to 15 M EUR. Environmental investments can be profitable", added Mr. Treand.

Energy efficient production process
Energy savings would help protect the environment, human health and increase the profitability, competitiveness and sustainable growth of industries; create jobs and benefit the wider economy. Investing in energy efficiency is a low - risk, high - payback strategy to promote economic growth and competitiveness. "Our process of flash smelting generates chemical exothermic reaction. The smelting of Copper concentrate is a reaction between Sulfur and Oxygen. This generates lot of heat witch is unused! Our study shows that this extra heat can be collected, then used to generate steam and then transferred to an installation generating electricity. This energy is for free and can generate 10 MW electricity continuously. An investment of 18 M EUR have to be made. Green energy generation like our steam turbine is a key project for us to stay competitive in the future. Similar installation with solar panels will need an investment of 80 M EUR. The solar panels will work at this capacity only when the sun is available. Our installation will be constant 24/ 7. This investment will make us generate a saving between 3 to 5 Millions annually and the energy will be from steam and totally green", stated from Aurubis Bulgaria.

Aurubis Group
The Aurubis Group is the largest copper producer in Europe and the world leader in copper recycling. Company produces 1 million tonnes of copper cathodes and more than 1.2 million tonnes of copper products each year. Aurubis has sites in seven European countries with a total of about 4,700 employees. Thanks to its wide range of services, the producer rank among the global leaders in its industry.
Aurubis’ core business is the production of marketable copper cathodes from copper concentrates, copper scrap and recycling raw materials. These are processed within the Group into continuous cast wire rod, shapes, rolled products as well as special wire and profiles made of copper and copper alloys. Precious metals and a number of other products, such as sulphuric acid and iron silicate, round off its product portfolio.
Customers of the Aurubis Group include companies in the copper semis industry, the electrical engineering, electronics and chemical industries as well as suppliers of the construction and car industries.
Aurubis is oriented to growth and to increasing corporate value. The main focus of its strategy is on strengthening the business, utilizing growth opportunities and practicing a responsible attitude when dealing with people and handling resources and the environment.