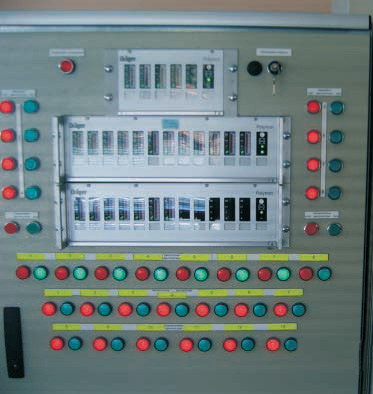 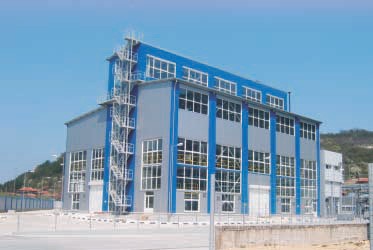 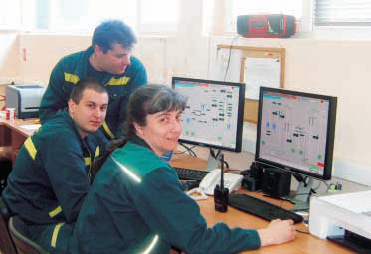 At the end of last year the biodiesel installation of Slanchevi lachi Provadia, Bulgaria was launched. The large-scale investment of Zarneni Hrani Bulgaria is surely not only among the biggest in the country, but in terms of capacity it matches similar plants in Central and Western Europe. A specialized laboratory for quality control of the product has been set up. With a yet nonexistent biodiesel market in the Bulgaria, the production facility works for export at the moment.
The installation can be viewed as consisting of two parts - production and warehouse unit, whose management is based on the platform ControlLogix of Rockwell Automation (official distributor of the US company for Bulgaria is the firm Rotec.) The engineering, including design, construction and launching of the system for control and management of the warehouse, is executed by Partners Maint Company. It is hard to systematize the characteristic features of the incorporated automated systems. Their specifics includes distributed intelligence for management, a defined degree of reserve, a special anti-detonation arrangement in part of the equipment, practically unrestricted scope for enlarging and upgrading. The used field equipment is made by proven producers as Adler, APC, Danfoss, Draeger, Giacomini, Endress&Hauser, Emerson Process Management, RTK, Samson, WIKA, and others.
The capacity of the installation is 300 tons per twenty-four hours, that is, around 100,000 tons per year. The production process is wholly automated and continuous (four shifts rotate per twenty-four hours.) The warehouse is also automated and equipped to simultaneously load three cisterns. In general, the production part encompasses three reactors, where the production process runs in succession. The installation processes raw oil into biodiesel and technical glycerin (it has purity of 85%). As already mentioned, the quality of the products is controlled by a plant laboratory.

The production equipment is made by Desmet Ballestra.
"The idea to setup this production facility of biodiesel came up at the end of 2005. At the start of the following year we signed a contract with the Italian company Desmet Ballestra for delivery of the equipment. Right after that we started the design work of the building, where the workshop is, in parallel with the warehouse unit. The equipment arrived at the end of 2006. The realisation took short of two years, and from the end of 2008 the workshop has been producing regularly," Engineer Dobromir Tsankov, technical director of Slanchevi lachi Provadia, commented. "The biodiesel is meant overwhelmingly for external markets, understandably. The warehouse unit was designed and executed wholly by Bulgarian firms. Energoproject was the chief executor - doing the design and electrical part of the project. The mechanical part was assigned to firms from the city of Varna and Provadia, which produced the reservoirs of the warehouse unit. We are glad that we could configure the installation according to the requirements of Desmet Ballestra, we launched it successfully, and it operates at its projected capacity.
The biodiesel is in conformance with the European norm EN14214, which affords us the opportunity to market the produce in the EU," he added.
The Provadia refinery is a wholly integrated technological system for production of plant oils. The assets of the plant are 100% ownership of Slanchevi lachi Provadia, which is part of Zarneni Hrani Bulgaria JSC.  The technological processes in the plant include all states of processing  - from the oil seeds to final product. The production is executed in four major and two auxiliary workshops. The major ones are: Oil extracting, Refinery, Biodiesel, Bottling. At the moment an out-and-out modernization of the facilities for oil extraction is being carried out. The goal of the investment is to increase the capacity of the workshop from 230 tons sunflower seed per twenty-four hours to 600 tons, raising the efficiency and reducing the energy consumption in the production process, Slanchevi lachi Provadia Company claims.
As for the biodiesel production, the company points that the yield is 100% - one town raw material yielding one ton bio fuel.

Scope and period of implementation
The automated systems, monitoring and managing the installation for biodiesel and the warehouse unit, encompass the whole field equipment, including all fixtures, pumps, heaters, gauging devices for level, pressure, consumption, and temperature. The project for the system for control and management of the warehouse unit was prepared through the period April 2007 to October 2008. Also the required equipment was delivered, the assembly of the technical equipment and the system was done, and the required tests were carried out.
"The project is largely based on controllers ControlLogix and brought out Flex I/O modules, in a standard Ex arrangement. The equipment is absolutely compatible with the gauging devices and the executing mechanisms, including flow meters, level meters, transformers of pressure and thermo resistances. The elements used in the system for automation are by proven producers, interchangeable and allow automatic adjustment, which achieve smooth operating and quick replacing," Partners Maint Company comments.

Functionality of the system
The automation of the warehouse unit is realized by a digital system for management and a system for protections and blockings. Its main function is to secure a reliable control of the systems and the related auxiliary equipment - in all regimes of exploitation. Some of the main functions of the system are:
• Automatic and remote control of the systems, mechanisms and fixtures;
• Automatic control of the continuous processes (automatic regulating) within the range of the input technological parameters;
• Automatic protection of the equipment in emergency situations;
• The system has also the function of safeguarding and uninterrupted control of the status of the equipment and the technological process. For that, the corresponding information is being passed to the shield of control, to the operator, to the devices and the video terminal devices. The system also automatically registers the main current parameters and their deviations. It performs warning and emergency signaling when the parameters deviate outside the limits, and also is equipped with a program interface for signalization about the status of the technological equipment. The system allows for quick work-out and introduction of new recipes, to suit the needs of the market, the firm Rotec adds.

Structure of the system
The system for control and management of the warehouse unit is structured on the following levels:
• Connection with the process. It is realized through measuring devices, transmitters, blocks for galvanic disentanglement and repeaters, blocks for priority control of executing mechanisms.
• Controllers that can be programmed, monitoring of the process, automatic control, regulating and defences.
Visualization and control are realized, constructed is a system for realizing man-machine interface, link to the computer network of other units, and others.
• Subsystem for realizing man-machine interface for monitoring and control of the technological process. It is realized through a shield for control and a local shield for control by location of given execution mechanisms. The goal is preserving continuity with the system for control of the installation for biodiesel.
• Operator stations. The control room in the Refinery workshop is set up with four operator stations, two of which are for monitoring and control of the processes in the warehouse unit. "As it is well known, they are the major instrument, through which the interface man-machine is realized. The operator stations present to the user all necessary for the functional requirements of the system means: monitoring; control (solely from the operator station of the shield for control); control of the automatic defences; diagnostics and others," the engineering firm adds.

Scope for future development and upgrade
The usage of the module architecture ControlLogix, jointly with Flex I/O modules in Ex arrangement in open network communication Ethernet/IP and ControlNet, offers a number of base advantages, the firm Rotec claims. Among them are the possibilities for enlargement with additional processors, communicational and I/O modules under feed "online", without interruption of the operation of the machine. "One processor can have up to 4,000 analogue and 128,000 digital inputs/outputs. Among the possibilities for future development and upgrade of the system is automatic addition of new software functional modules for control of continuous processes, while it being not necessary to interrupt the operation of the system," Partners Maint Company declares.
Another path for development of the already constructed system is enlargement of the HMI interface with new screens, realization of remote monitoring of the process through remote devices, as PDA, GSM, Notebook, and others. It is possible to invest towards realization of "safety" functions to level SIL3 and reserve through enlargement of the present system.

Specifics of the platform for automation
It was already pointed that the systems for control of the warehouse unit and the installation for biodiesel are wholly built with equipment, technology and software of the firm Rockwell Automation. In addition to the most powerful controllers ControlLogix and the brought out Flex I/O modules in standard and Ex arrangement, universal language for programming of continuous and discreet processes RSLogix 5,000 and SCADA software for visualization and control of the process RSView 32 are used. They are in combination with RSView Active Display Server/Client technology of Rockwell Automation. The software for the controller is validated and emulated with system software of the firm.
The integrated platform for control ControlLogix achieves high output and reliability in the control of various types of processes - production lines (continuous control), technological continuous processes, control of motion and positioning (robotized) systems, realization of "safety" functions for safety of staff and equipment - in all combinations. The module character of the platform allows for designing, construction and modifications with great efficiency and with considerably less expenses for training and engineering. The efficiency - from an engineering standpoint, is enhanced through up-to-date software instruments for configuring, organization of memory and symbol programming, which require less programming and memory," Rotec firm claims.
The investment in ControlLogix ensures a number of advantages like refurbishment of the firmware. The flexible platform allows simultaneous operation of several processors, various networks and input-output modules to be fixed and to operate in a single frame without restrictions.
The programming environment RSLogix 5000 is user friendly, compatible with IEC 1131-3 interface, symbol programming with structures and array for greater productivity and number of instructions for various applications. The open network architecture NetLinx is equipped with communication instruments that can be used in various networks, like Ethernet/IP, ControlNet and DeviceNet.

Equipment industrial implementation
Among the advantages of the platform, the engineering firm claims, is the smooth integration with the existing systems. A characteristics feature is the high-speed transfer of data along the communication line of the frame of the programmable logical controller. ControlLogix5550 controller provides a platform for control with great speed of reaction, Partners Maint Company puts forward.
"It is possible to add so many programmable controllers and communication modules as are necessary, as well as to fix several controllers on one frame. The size of the memory is selected according to the needs of the corresponding application. Among the capacities of the platform, which, unfortunately, was not realized in the plant, is the possibility for integration of various technologies, including continuous control, control in motion, control of motion and of processes. And last, ControlLogix5550 meets the needs of many applications, in which the control is distributed to great extent and the free space of the tables and panels is restricted," the company-supplier of the equipment claims.