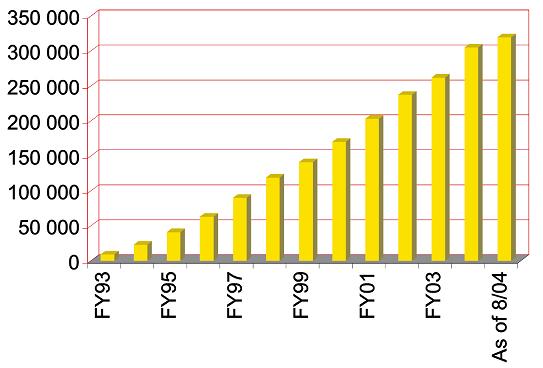 Steve Sanghi, Chairman of the Board, CEO and President Microchip Technology Inc.

According to one study, the typical consumer touches almost 100 embedded microcontrollers (MCUs) every day before noon. Recent surveys have also shown that the mobile phone is the device that most consumers feel that they could least afford to lose. Thanks to mobile computing and communications, the world is smaller, response times are shorter and even the most non-technical person is aware of the presence of computers and software through the products that they use every day. Consumers are demanding more computing power for gaming, digital photography and real-time video and they understand terms such as MIPS, megabytes and megahertz. This growing awareness of technology means that the average consumer is now a more sophisticated technology shopper. The world of technology, once the province only of the technically-trained, is now open to the consumer. Despite this, however, the revolution in distributed intelligence remains relatively closed even to the technically astute. Information Superhighway vendors ship almost 300 million units each year, mobile phones another 500 millions units. While both markets are large, they are dwarfed by the market for microcontrollers which ships over 5 billion units each year, providing intelligence for every day items. The largest segment of this market, 8-bit MCUs, contributes over 3 billion of these units. Understanding the market for distributed intelligence requires an understanding of the forces which are driving the overall demand and some of the new applications.

Embedded intelligence is all around us but is totally invisible to the user. The 100 embedded MCUs that the typical consumer touches before noon, are in toasters, hair dryers, cordless telephones, security systems, microwaves, washing machines and automobiles. All these products, and more, use local embedded intelligence to increase reliability, improve energy efficiency, ensure safety or security, adapt to changes or simplify user interfaces.

Improvements in semiconductor process technology have contributed greatly to the development of the 8-bit MCU. Early MCUs were considered to be a complete computer on a chip and priced at several hundred dollars each. Their memory architectures and input/output configurations were similar to those of computers, they were programmed in assembly language ,and had packages of 40 pins or more. Development tools were large, cabinet-housed systems costing $10,000 or more. High costs made the technology accessible only to a very small base of customers and applications and restricted their use to high-end equipment built over multiple printed circuit boards. Today, sub-micron process technology has enabled 8-bit MCUs to range from six to 100+ pins, with 256 Kbytes or more of programme memory and to integrate very sophisticated peripherals such as Controller Area Network (CAN) modules for the automotive and industrial control markets, or Universal Serial Bus (USB) modules for connecting to personal computers. Development tool prices are lower too, with powerful systems priced at less than $200 and high-level language compilers from $99.

The number of applications using 8-bit MCUs is increasing due to the continued need to improve product functionality, manufacturing efficiency and to comply with emerging regulations. Security systems, for example, used to be based on fixed access codes without event logging. Now, 8-bit MCUs allow them to use rolling codes and log events continuously, even when power is lost, to prevent code-capture techniques. The Flash programme memory embedded into 8-bit MCUs enables field configuration during installation which allows systems using multiple sensors of the same type to easily adapt under software control, instead of using cumbersome switch settings. Multi-press switches on stereo systems are moving toward full keypads with LCD displays giving enhanced user feedback via menu-driven systems. Instead of electromechanical switches, household appliances are being updated with electronic switches which reduce cost whilst increasing reliability and longevity.

Embedded intelligence is also helping motor control applications to meet worldwide energy conservation regulations. Simple mechanical drives with constant speed generation are being replaced with low-cost MCUs which provide variable speed control for most common motor types. Varying motor speeds can significantly reduce power consumption, with a 20% reduction in speed achieving a 50% reduction in power for many motor control applications. In addition, electronic control can use software techniques to help reduce audio noise in the system. MCUs used to vary from low-memory, 8-pin devices for simple open-loop control, to versions with 80+ pins and 128 Kbytes of programme memory for complex control and communication. Strict regulations for energy consumption may make the typical transformer-based power supply obsolete, with a common requirement being to reduce the power drain when products are turned off. MCUs are increasing being used in intelligent power supplies that isolate themselves from the AC power line when idle to reduce standby power consumption. Systems where safety is a concern have added sensors to monitor performance and feedback to detect abnormal operation, and MCUs are required to read and act on the data from these sensors.

The second trend to drive the growth of 8-bit MCUs is the increase in the number of units in each end-product. The automotive market, for example, may not necessarily be making more cars each year, but the average car now has 30 - 40 MCUs compared to around 10 MCUs just a few years ago. Here, electronics are used to provide the occupants with convenience, safety, comfort, entertainment and added fuel-efficiency. Embedded intelligence is also growing as distributed control increases the need for peripheral connectivity. Distributed systems tend to use MCUs with larger memory sizes (up to 256 Kbytes) and varying pin counts. As systems increase their connectivity for remote control and diagnostics based on standard software platforms, so MCUs are offering integrated standard communication ports like CAN (Controller Area Network), RS-485 and Ethernet. Multiple MCUs per system are also starting to be embedded into home appliances such as refrigerators, air-conditioners and washing machines. Even systems such as garage door openers, which were once totally electromechanical, may now have seven or more MCUs providing signal security and redundant safety. In each of these cases, as multiple MCUs are used to provide embedded intelligence in end-products, MCU growth is much higher than the growth of the products into which they are incorporated.

The third and final trend influencing demand for 8-bit MCUs is the move toward battery-management systems for mobile products. Battery-powered systems are adding embedded MCU intelligence to help with all aspects of battery charging and fuel gauging. Nowhere is this illustrated more clearly than in notebook personal computers. First-generation notebooks could either operate or charge the battery, but they could not do both simultaneously. Adding a dedicated processor to manage the battery system allows for charging while operating the system. It also enables the notebook PC to handle new capabilities such as charging multiple batteries with different chemistries and switching between them when one is fully discharged. The size of MCUs ranges from very small (6 pins) when embedded inside the battery pack to very large (80+ pins) for multi-cell systems. Battery management functions are performed without modification of the standard software and without introducing new hardware dependencies that can restrict compatibility. Smaller 8-bit MCUs, survive and thrive alongside larger system processors but they are simply not seen directly.

Low-cost semiconductor technology and the need for closed-loop systems are fuelling demand for the 8-bit MCU. With simple deterministic implementations, low-cost but powerful development tools, a robust 5-volt operation, and proven, lower-cost process technologies, 8-bit MCUs are viable in environments where 32-bit processors would not be cost-effective or reliable. Many consumer applications, for example, have simple power supplies which are regulated to ±10%, rather than the ±5% which is essential for many 32-bit processors. As the world moves towards closed-loop control, so the need for analogue sensor interfaces moves with it.

As system complexity increases, the use of MCUs will accelerate because it is easier to define and develop complex software than complex hardware. There is a growing design trend toward combining a standard MCU with software to control system operation. This allows the system to be defined, verified and modified quickly in response to market changes. Flash memory allows field updates of software, to redefine operation and to add or upgrade features. Many products which previously used smaller programmable logic devices are now being re-designed to use embedded intelligence. Given the continued strength of the trends driving 8-bit MCU demand, the conclusion must be that the market for embedded intelligence is poised to accelerate in the coming years and the 8-bit MCU should continue to lead the way in unit shipments.