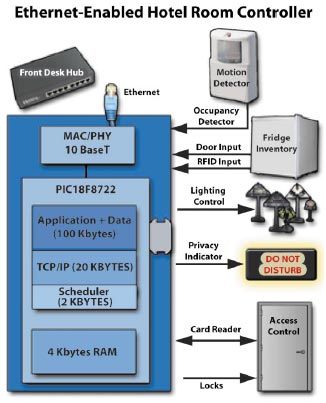 One of the basic rules of evolution is that adaptation is the key to survival and perhaps no other technology demonstrates this as well as the 8-bit microcontroller (MCU). Throughout its thirty-year history, the 8-bit MCU has undergone continual adaptation and, even today, is colonising slots which would once have been the exclusive territory of the more powerful 32-bit MCU or the smaller 4-bit MCU.

The first single-chip 8-bit microprocessor was released by Intel in April 1972. The 8008 was capable of executing 48 different instructions, addressing a memory space as large as 16 Kbytes, and operating on six registers at a clock speed that could reach 800 kHz maximum. Thirty years on, and our PDAs, desktop computers and workstations are driven by powerful multi-gigahertz 32-bit and 64-bit processors. But the 8-bit lives on. It is in products that touch our lives everyday, products such as hair dryers, washing machines, light dimmers, air conditioners, air fresheners as well as hundreds of others. The 8-bit MCU is the majority of intelligent “non-life forms” that surround us. Of course, there are other MCUs. The 4-bit, 16-bit and 32-bit versions are still very much in use, but the 8-bit architecture still out-numbers them all.

The 8-bit MCU is an object-lesson in adaptability. In the 1990s, the embedded-control industry experienced a rapid evolution in memory technology with a dramatic transition from ROM to OTP, to Flash technology. With Flash came the ability to undertake in-circuit programming which made new categories of applications possible. It allowed fast adaptation of products to meet the emerging needs of markets that had grown to expect shorter development cycles and products which were not only smarter, but which could be continuously upgraded.

During each transition, 8-bit MCU architectures have been at the leading-edge of memory technology. This has reinforced their position as the architecture of choice for new and innovative designs and the 8-bit has become synonymous with rapid prototyping and low-risk development.

And still the 8-bit is continuing to adapt and extend its territory. The latest barrier to fall is size. Package sizes for 8-bit MCUs are becoming smaller and smaller. 8-pin packages are common and, most recently, Microchip released the PIC10F family of 8-bit MCUs in a 6-pin SOT-23 package, originally designed to contain single transistors.

Packing up to 512 bytes of Flash memory, an integrated 4 MHz oscillator, an 8-bit timer, an analogue comparator and four general purpose I/Os, the 6-pin PIC10F devices have much higher levels of integration and flexibility than any 4-bit MCU. This is allowing the 8-bit MCU to erode the only advantage left to the 4-bit architectures, while delivering superior performance. In addition, 8-bit architectures have always enjoyed better support in terms of tools and access to higher-level languages, with the resulting increase in ease of use.

One of the most resistant barriers to the growth of 8-bit applications was demolished recently with the introduction of 8-bit architectures with program-memory sizes larger than 64 Kbytes.

The amount of memory that an MCU can address is dictated by the size of the address bus. Historically, the address bus in all primitive 8-bit architectures had been set to twice the data-bus size, i.e. 16-bit. The 8-bit architectures seemed to present an insurmountable barrier at 64 Kbytes and going beyond this required paging or banking techniques. The 64 Kbytes barrier was considered by some to be intrinsic to the nature of the 8-bit MCU. However, a few leading manufacturers have recently introduced new families of 8-bit MCUs capable of addressing up to several megabytes of programme memory. Microchip’s PIC18F architecture, for example, is capable of addressing up to 2 Mbytes of linear memory and the company is currently offering several MCUs with up to 128 Kbytes of onboard Flash in small (10x10 mm) 64-pin and 80-pin TQFP packages.

The ultimate example of the 8-bit MCU’s evolution can perhaps be found in one of the most advanced embedded applications: Ethernet. As with many other complex protocols, the TCP/IP stack that is the foundation of all Ethernet applications was developed in the mainframe world first, and later adapted to workstations and personal computers where mostly 32-bit and 64-bit processors were being employed. Porting the code and compacting it to fit in an 8-bit MCU’s onboard memory might have seemed like quite a challenge at one time. But today, 8-bit MCUs are available with free TCP/IP software stacks that fit comfortably in the 8-bit MCUs Flash memory.

The TCP/IP application in Figure 1 is not simply a proof of concept. 8-bit MCUs allow applications to achieve lower-costs whilst increasing the scope for higher capabilities.

Applications can, for example, use the sophisticated power-management techniques offered by most modern 8-bit architectures to implement very low power applications. Microchip’s nanoWatt technology, available on most recent PIC® MCUs, offers up to seven low-power modes for great flexibility in the choice and use of internal and external oscillators, and helps designers to modulate performance (uncompromised to 48 MHz) with long battery life and robustness.

Embedded 8-bit MCUs are often called upon to perform in very harsh and unforgiving environmental conditions. As such, they offer onboard watchdog circuits based on independent oscillators, fail-safe clock monitors, and brownout and low-voltage detect circuits. These can make the 8-bit MCU a superior alternative to larger architecture devices for many demanding applications.

Adapt and survive has been the strategy of the 8-bit MCU for the past thirty years. Today, smaller, 6- and 8-pin 8-bit MCUs are challenging 4-bit architectures with the offer of enhanced capabilities. The previously unassailable barrier of the 64 KByte address bus had been broken, and 8-bit MCUs can now address up to 2 Mbytes of linear memory allowing them to challenge the powerful 32-bit MCU. The addition of advanced power-management techniques achieved, for example, through Microchip’s nanoWatt technology, means that the 8-bit MCU looks set to continue its domination of the market.