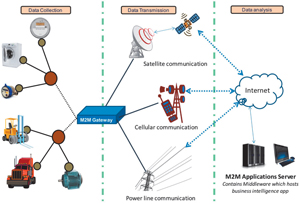 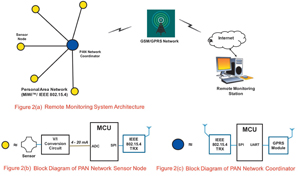 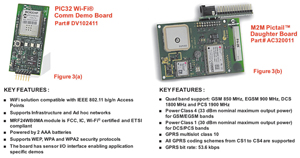 The internet has already revolutionised the way in which people communicate with each other and now it is ready to enable another revolution: the proliferation of smart communication between machines.

The technologies which will introduce smart machine-to-machine (M2M) communication are the high-speed 4G wireless standard and Internet Protocol version 6 (IPv6). Together, these technologies will enable designers to create a world in which smart devices could offer a new level of M2M services.

The possibilities include: a smart phone which could receive an alert and location message when its owner’s car is stolen; a camera which could communicate with a GPS device to suggest local beauty spots; a fridge which could text a reminder to buy more butter; automatic uploading of data from a personal health monitoring device to a GP; and a machine which could send an alert when it needs to be repaired. These, and so many more applications, will all be enabled by smart M2M communications.

Figure 1 shows the interaction between the key elements of M2M technology.  These elements allow the system to receive data from an end-device and transmit that data, over a communication network, to application software which processes and converts it into recognisable information for the application. Typically, M2M networks transmit data using Global System for Mobile (GSM), General Packet Radio Service (GPRS), power-line or satellite communications.

Designers of industrial applications have been quick to see the potential of M2M communication. The combination of powerful sensors, advanced embedded microcontrollers and wireless networks has enabled new levels of control through applications such as remote monitoring of industrial equipment and fleet management. Considering these two applications in more detail reveal show M2M communication could transform the way in which the world works, in addition to saving cost, improving efficiency and reducing manual tasks.

Remote monitoring
A remote monitoring system for industrial equipment could use the combined inputs from sensors for detecting vibration, fluid leaks, temperature, mechanical wear and noise, to assess the condition of the equipment. Figure 2a shows the position of each sensor or node, represented by a yellow dot, and connected in a star topology to the network coordinator, shown by the blue dot. Together, the nodes and network coordinator form a Personal Area Network (PAN).

By providing advance warning of potential equipment malfunctions, M2M communication can be used to reduce the cost of unplanned downtime and to increase the efficiency of preventative maintenance schedules.

Sensor nodes and PAN coordinator
The block diagrams for asensor node and a PAN coordinator are shown in Figures 2(b) and 2(c).
The sensor parameters of the equipment are transmitted via a 4mA to 20mA current loop, which is a robust sensor signalling standard for industrial process and control. These parameters are received by the MCU through its on-chip Analogue-to-Digital Converter (ADC). The MCU uses a PAN protocol stack, such as MiWi™, to interface with an IEEE802.15.4 transceiver which sends the processed sensor data to the PAN coordinator.

The engine which drives communication for the entire PAN is the embedded MCU within the PAN coordinator. This MCU interfaces to both the IEEE802.15.4 transceiver and GPRS module through serial ports. The MCU’s flash memory is used to store the map of the complete MiWi PAN, assign network addresses and establish links to new sensor nodes. It also translates the PAN protocol data to GPRS format to send over the GPRS network.

The MCU controls the GPRS module using Attention (AT) commands for data transmission. The key factors for the selection of the embedded MCU should be a high throughput, sufficient memory, and a wide range of peripherals with support for Direct Memory Access (DMA).

Fleet management with M2M
Fleet management has become a popular application for M2M technology. Vehicles fitted with GPS devices are tracked and their positions communicated back to the monitoring system using GPRS or GSM modules.

The GPS module is used to provide the position coordinates for the vehicle, whilst the CAN bus is used to collect data from different modules within the vehicle, such as the Antilock Brake System (ABS), Engine Control Unit (ECU) and airbags.A 32-bit microcontroller provides the engine for a CAN/GPRS gateway by interfacing to the CAN bus, as well as to the GPRS and GPS modules, and translating CAN data into the GPRS format before sending it over the GPRS network to the Fleet Management Station.

Microchip’s M2M PICtail™ daughter board contains GPS and GSM/GPRS modules which are equipped with many AT commands in addition to the wide range of features shown in Figure 3(b).

The M2M PICtail board provides all of the hardware information, software binaries including the stack, production test bench design and test software, certification, training and documentation to enable an accelerated time-to-market.  It enables a wireless, ultra-compact, low-power communications solution for easy integration into high-volume consumer, industrial and automotive designs.

The proliferation of communication networks and the flexibility of silicon solutions mean that the world is approaching a tipping point, at which the number of people connected by the Internet will be over-taken by the number of devices and machines which are connected via the Internet. For designers, this means that there is increased pressure to win a race to market for products which are equipped to deliver the full possibilities of M2M communication.

Read the cover story "PCB and EMS Industry in Bulgaria" to find out more about the development of the sector, the main manufactured product groups and some of the specifics of the local market...

The main topics of this year’s edition of the world’s leading trade fair for electronics development and production productronica 2019 are Smart Factory and Smart Maintenance. Mode details you can find here...

Factories become far more automated with remote manufacturing and control concepts. How to ensure security when connecting industrial embedded systems to the cloud? Learn from the newest issue...

Self-protecting PTC brake resistors are often used for frequency inverters in the low power range as well as for servo controllers. More about their specifics and applications you may read here...