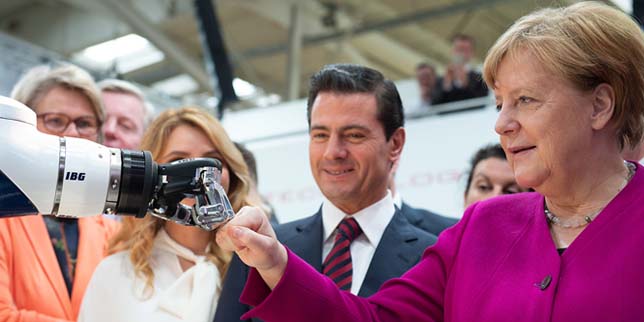 Under the motto of “Integrated Industry – Connect & Collaborate”, a total of 210 000 visitors seized the opportunity to explore the innovations on display at this year’s Hannover Messe & CeMAT. The exhibition was held on April 24 – 28 this year and welcomed a total of 5800 exhibitors.

Light + Building 2016 will focus on energy efficiency and security technology

HANNOVER MESSE showcases the “Factory of the Future”

Topics like machine learning, artificial intelligence, industrial IT platforms, the expansion of power grids for eMobility, the use of robots and autonomous systems in production and intralogistics, and the role of workers in the integrated factory were the subject of intense debate at the stands of exhibitors at the event.

This year’s official Partner Country of the event was Mexico, which profiled itself as an innovative business partner and industrial location. More than 160 Mexican businesses were at the fair to present their products and innovations. German Federal Chancellor Angela Merkel and Mexican President Enrique Peсa Nieto agreed that progress and prosperity could only be achieved via open markets. Mexico’s participation therefore fit perfectly into the context of the international free trade agreement concluded between Mexico and the European Union, with 99% of goods between both parties to be traded in future free of tariffs.

Hannover Messe has once again confirmed it is the definitive home base for the global transition to Industry 4.0. Extended value creation networks, new forms of human-machine collaboration, and the increasing integration of artificial intelligence into production operations: These remain the key features of digitization and connectivity, and were once again first unveiled here in Hannover.

All of this requires even more connectivity, which is why the German Electrical and Electronic Manufacturers’ Association (ZVEI) has been calling for an industry-capable 5G network right from the start,” said ZVEI Executive Director Dr. Klaus Mittelbach.

Some of the central trends highlighted at this year’s fair included the ongoing convergence between IT and mechanical engineering, industrial IT platforms and other new business models, and the imminent impact of artificial intelligence on the factory environment. The exhibitors in the automation halls profiled drive technology and fluid power as a key driver of digitized and integrated manufacturing. The close integration of production and logistics was a key topic in the CeMAT halls. Meanwhile, displays in the energy-related halls centered on energy efficiency in direct correlation with climate protection.

The focus was on decentralized, smart energy systems and infrastructure solutions for the environmentally friendly mobility of the future. An innovative performance was also showcased by subcontractors and development partners, who revealed approaches to connecting operations with customers for seamless efficiency.

The next Hannover Messe will take place from 1 to 5 April 2019, with Sweden as the official Partner Country, while the next CeMAT will run parallel to HANNOVER MESSE from 20 to 24 April 2020.